Despite starring in one of the UK’s most watched television shows, Guadeloupe remains one of the Caribbean’s best kept secrets, says Laura Gelder.

You don’t need to have watched Death in Paradise to appreciates the Deshaies, a little fishing village which stars as Honore in the TV series.
The town hugs the lush north west coast of Basse-Terre Island and is reached by a steep road that winds down from volcanic rainforest-smothered slopes. A long pier stretches out into the blue bay where fishing boats bob and behind red roofs rise higgledy-piggledy from the green.

The town is no polished film set either. Some of the shop fronts are nicely painted in bright colours, like mango and turquoise, but some are rusted, peeling, and weather beaten. Tin-roofed shacks sell perfectly imperfect tropical fruits, laid out on wonky trestle tables covered in brightly checked madras cotton. 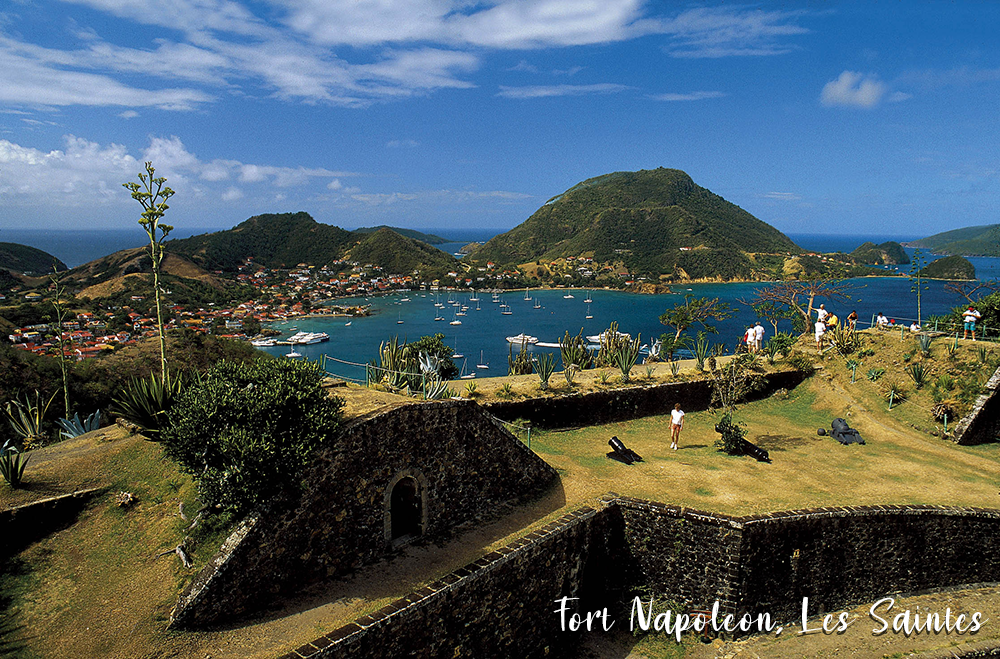 Deshaies has a long pier that stretches out into the blue bay where fishing boats bob and behind red roofs rise higgledy-piggledy from the green.

Finding yourself in the location of a TV series or film can be quite discombobulating and even disappointing but that wasn’t the case for me, partly because Guadeloupe is everything you dream of in a Caribbean island and partly because I’d never actually seen Death in Paradise when I visited the island.

“Ahhh, you’re English, you love Death in Paradise then?” asked the bar man, as he poured my Carib beer the night before. He wasn’t the first person to assume this or the last, since the majority of Brits who make it to these French Caribbean islands are sailors or diehard ‘DiP’ fans. Since returning I’ve watched many episodes (I thought I’d better after meeting its then star Kris Marshall and feeling distinctly guilty for lying to him as well). 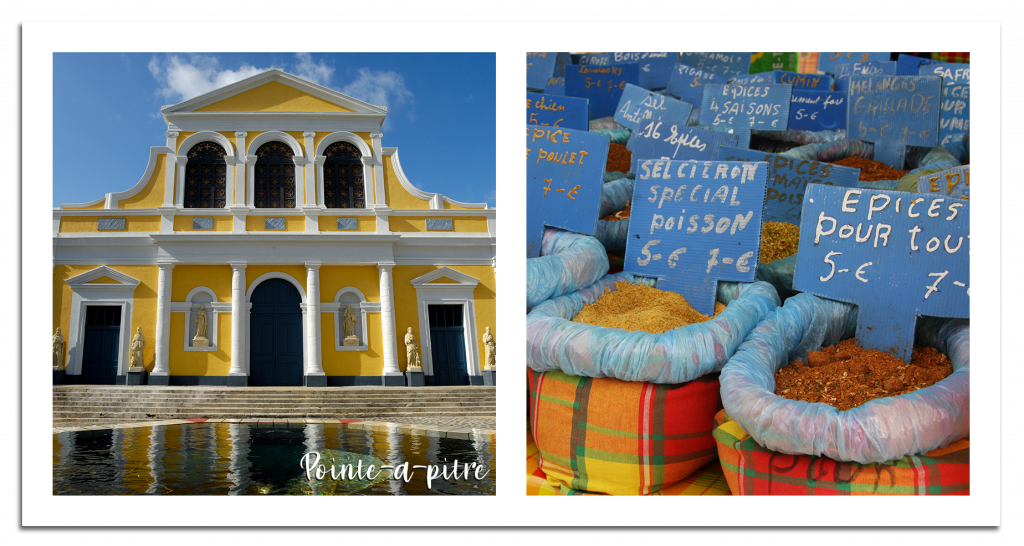 For those of you that haven’t watched it either, let me sum it up. Its star is a bumbling British Detective Inspector (the latest incarnation is played by Ralph Little). His sidekick is a smart, beautiful French-Caribbean woman called Florence who gets away with wearing denim shorts to work. Officers Dwayne and J.P provide a side dish of comedic value with their old/young, traditional/modern act. They all work on the Caribbean island of Saint Marie – full of rum and sun, sand, and an awful lot of people getting bumped off.

Every episode a head-scratcher of a murder happens in an exotic location. They go in and ask lots of questions but appear stumped. Photos of four suspects go up on a whiteboard and chins are scratched while red herrings are flung about and investigated. The DI bumbles. Florence is calm and professional. Dwayne is a bit dim but knows everyone and his goat on the island. J.P knows his way around a computer. But none of that matters because eventually someone will make an innocuous remark about coconuts and, cue the light bulb moment, there’s a close up of the DI looking less confused and mumbling about how ‘it all makes sense now’. The suspects are gathered, and, in dramatic Poirot fashion, he reveals who and how.

Over the years The Guardian has called it ‘formulaic’, ‘patronising’ and at best ‘meteorological escapism’. Nevertheless, it’s one of the BBC’s most successful programmes of all time and has garnered a global fan base. Plus, lets face it, predictability is an attractive quality in this era. 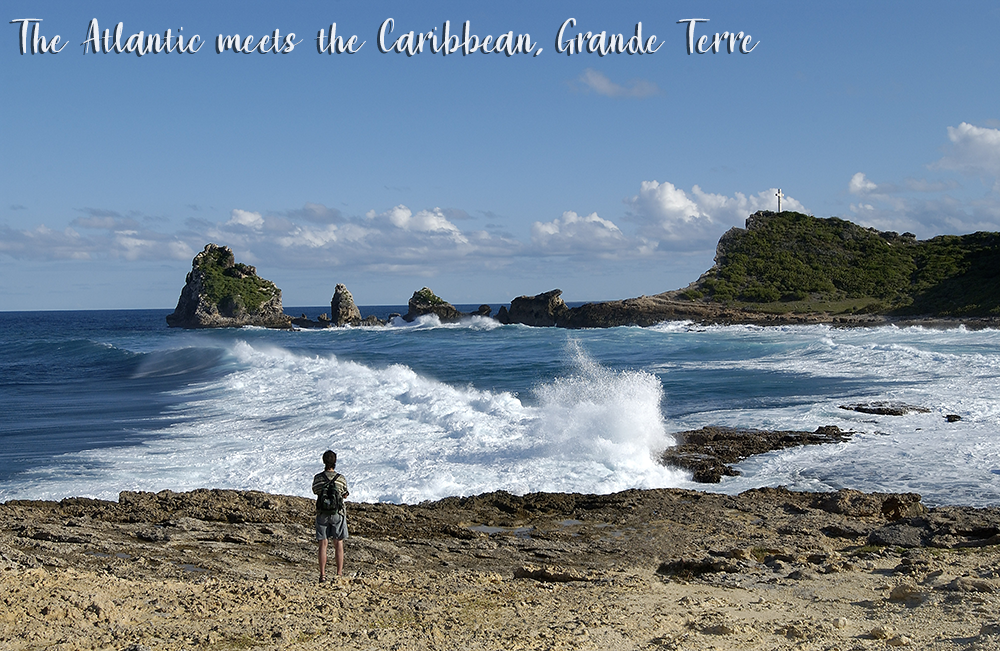 The archipelago of Guadeloupe is a French Overseas Territory, and you can’t fly to it directly from the UK, but it’s all the better for it. Its personality is chilled-out Caribbean with more than a dash of French flair, where rum shacks exist next to sophisticated bistros; colourful markets beside bouji boutiques. Drinking wine over long and leisurely lunches is de rigeur in balmy Guadeloupe, while dinner is preceded with an aperitif of ti punch, a sharp shot of rum, lime, and sugar which you make to your own taste – and peril. Your grilled fish, fried plantain, spicy cod fritters, or curried chicken will always come with a basket of excellent crusty bread.

The Ocean Conservation Trust is working towards its vision of a healthier ocean all around the world with its coral reef and sea grass restoration projects.
oceanconservationtrust.org

Guadeloupe’s population mainly lives on its two largest islands, Grande-Terre and Basse-Terre, which lie close together and resemble the wings of a butterfly. The surrounding sea hugs a few more scattered isles, all of which make up Les îles de Guadeloupe, linked by an efficient inter-island ferry service. For you DiP fans, back in Deshaies you can climb up to the wooden deck of Honore Police Station (actually the church hall) to pose in front of the sign and have a beer on the waterside deck which is Catherine’s Bar in the show (but actually a restaurant called Le Madras).

Not far away is Plage la Perle, the idyllic beach where the DI lives in his charmingly ramshackle hut. Despite being a showstopper of a beach and a TV star, it’s surprisingly quiet. When I visited the DiP crew were filming a fashion show at one end and the odd local was taking a dip but otherwise it was all mine. There was no big resort, just a little cafe serving fried fish at plastic tables.

Much of the rest of Basse-Terre is mountainous, smothered in jungle and designated a national park. Dominated by the lofty cone of La Soufriere volcano, the highest summit in the Lesser Antilles, here moss-covered trees tower into the misty sky and rivers run from the mountains. The spectacular Les Chutes du Carbet is the highest waterfall in the lesser Antilles, a 245-metre triple cascade. More accessible is La Cascade aux Ecrevisses, which pours into a cool, fern-lined natural swimming pool.

To really appreciate Guadeloupe, you have to get out on the water. Boat companies pick visitors up from the hotels and a typical trip travels through the mangroves of Riviere Salee which separates the butterfly, and into the Grand Cul-de-Sac Marin Nature Reserve. Here, the boat stops to allow you to snorkel over a shipwreck and visit the tiny island of Ilet Caret to lie on the pure white sand and watch pelicans dive. Lunch is served in a half-ruined fisherman’s hut settled on a sandbank, where you eat fish and sip rum with your feet dangling into the sea.

A side of Guadeloupe not really shown on Death in Paradise is its capital Pointe-a-Pitre, a bustling town on Grande-Terre mixing modern and colonial architecture. Here you can visit markets ranging from the tourist-friendly Saint-Antoine, selling spices and rums, to the rowdier fish markets lining the harbourside. 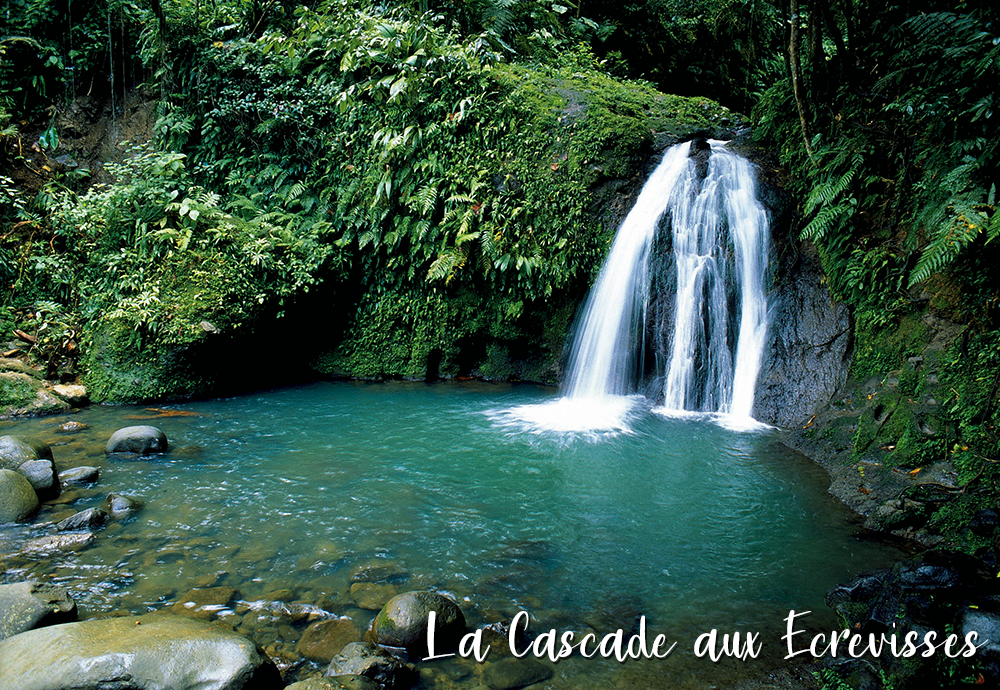 Impressive 19th century buildings still line the streets, including the imposing Basilica of St. Peter and St. Paul and the Museum Schoelcher, dedicated to the life and works of an activist who helped abolish slavery in Guadeloupe. You can discover more about that at the Memorial ACTe, an impressive modern monument and museum for the victims of the slave trade. Outside the city, the pace slows again, and acres of sugar cane fields have given rise to quite a few rum distilleries where tours and tastings take in the original sugar mills alongside the working machinery of today.

But if you really want laid back, head to the islands of Les Saintes. An archipelago in itself, it’s made up of nine islets but just two are inhabited, Terre-de-Haut and Terre-de-Bas. Arriving in Terre-de-Haut is like arriving in a different country. This part of Guadeloupe was originally inhabited by Bretons and Normans and the locals still have a very distinctive look.

Straight off the ferry you can wander among the small, brightly painted houses, shops and restaurants scattered along the waterfront and buy the local cherry jam or a salako, a traditional hat made with slats of bamboo and worn by fishermen.

The island is scattered with pretty fishing villages reached by winding roads and topped by the looming Fort Napoleon. The ramparts of this museum are scattered with cactuses and sunbathing iguanas and it has spectacular views of Les Saintes Bay, surely one of the world’s most beautiful. I didn’t get to visit the island of Marie-Galante, famous for its rum, ox carts, windmills and turtles, or La Desirade, which is a nature and geological reserve, but I was already sold. For your next meteorological escape, I urge you to consider a trip to Les Iles de Guadeloupe. I guarantee that you will come back singing, ‘non, je ne regrette rien’.

The Caribbean has been known to host many a film set. Here are some of the places you might recognise from the screen.

St Vincent and the Grenadines

Pirates of the Caribbean has been filmed all over the region but perhaps the most iconic locations were in these windward islands. The outer Grenadine island of Petite Tabac became the deserted isle where Jack Sparrow (Johnny Depp) and Elizabeth Swan (Keira Knightley) are abandoned by the dastardly Captain Barbossa (Geoffery Rush) on the first film, while the harbour of Port Royal was built on St Vincent itself.

This is James Bond’s island, where his creator Ian Flemming spent much of his novel-writing days and where many films were set and filmed. Famous locations featured in Dr. No include Dunn’s River Falls and the Green Grotto Caves. If you’re more of a Cool Runnings fan then you won’t be disappointed, you can actually take a bob-sled ride in Jamaica. It’s not on ice of course, but on a tracj that runs thrillingly fast through the jungle.

Bond film GoldenEye was filmed here, against the backdrop of the enormous Arecibo Observatory, an astronomy centre in the jungle. Johnny Depp also popped up here to film The Rum Diaries, with the historic city of San Juan amongst numerous stunning locations.

This is a feature from Issue 4 of Charitable Traveller. Click to read more from this issue.