What is it that makes Finland’s capital the happiest city in the world? Laura Gelder finds out during a cold, dark and wet weekend in Helsinki

The capital of the world’s happiest country is already plunged into darkness when I arrive, around 3pm in mid-January.

It’s difficult to see if people are smiling because they’re swaddled in woollen scarves and hats or hiding in vast fur-trimmed hoods. But as I lug my suitcase along the shopping street of Mannerheimintie, Christmas lights sparkle cheerfully above.

Helsinki is officially the happiest city in the world – according to the United Nations’ World Happiness Report – and Finland has been the happiest country for the last three years, tailed by Denmark, Switzerland, Iceland and Norway.

The report has a whole chapter exploring just why the Nordic countries are so content. It pulls out factors like generous welfare states, social cohesion, income equality and the freedom to make life choices, but I’m told that many Finns attribute their happiness to a close connection with nature.

A visit to Helsinki in the midst of its bleak winter feels like the worst time to explore this idea, since all I want to do is be inside. It doesn’t help that every window seems designed to lure me out of the cold. Warm pools of light from stylish lamps beckon, spilling onto the wet pavement; soft furnishings – knitted throws and fur rugs – seem to reach out offering palpable comfort, and windows steam seductively from within, silently communicating cosiness. The Danes may have invented the word ‘hygge’ but surely the Finns have perfected it.

Finland is largely not urban. It’s a land of lakes, rivers and the most forested country in Europe, with 70% of the land covered by trees. There’s an inherent respect for nature and the country is ambitiously aiming to be carbon neutral by 2035.

Sustainable Travel Finland is a programme from the tourist board that helps travellers recognise companies that are working towards sustainability by labelling them when they’ve filled certain criteria. The capital has its own similar programme called Think Sustainably and my hotel, Hotel St George, is certified. As soon I enter my room I see a card encouraging me to enjoy Finland’s famously good tap water. 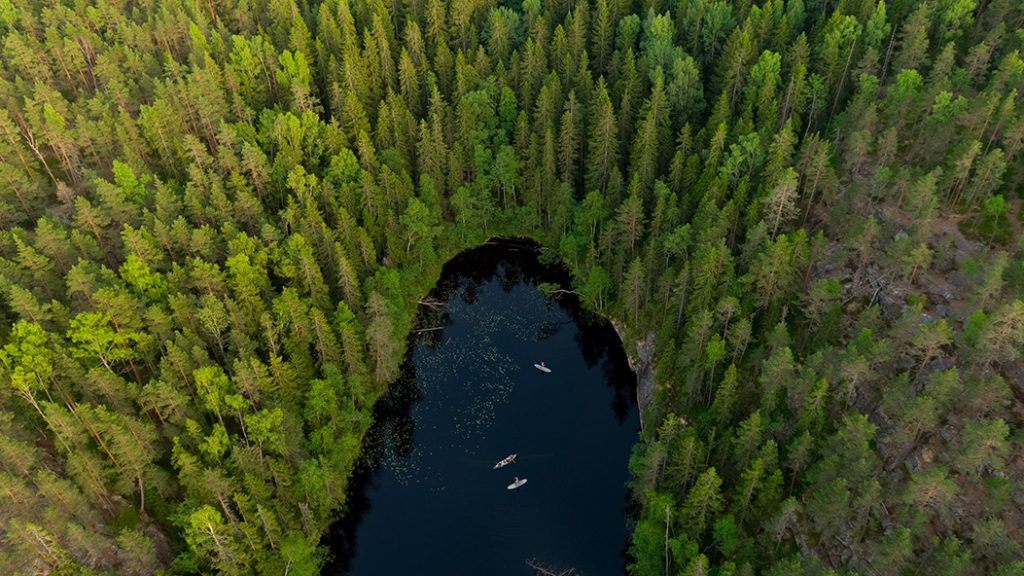 "Helsinki is officially the happiest city in the world...and Finland has been the happiest country for the last three years, tailed by Denmark, Switzerland, Iceland and Norway." 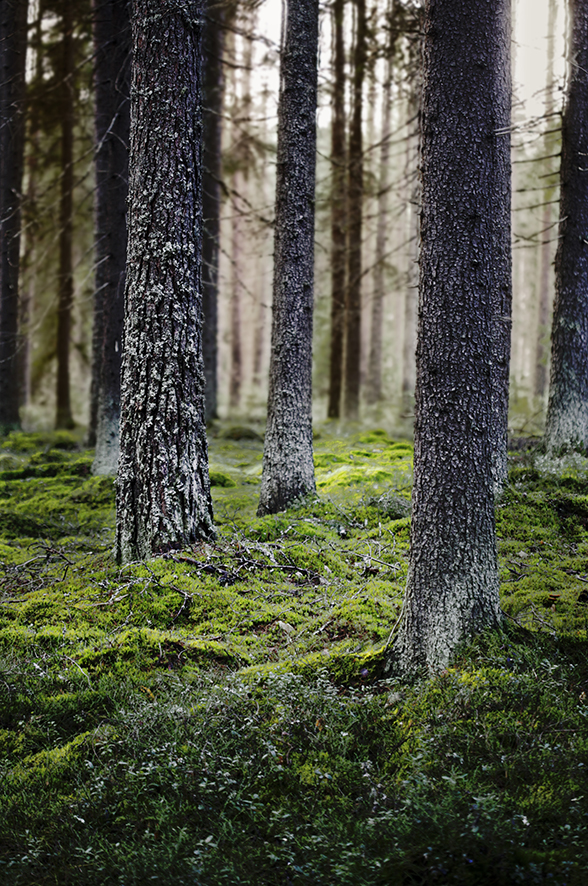 Nature in the city

There is a place in the city where you can retreat into the forest. Metsä/Skogen (forest in Finnish and Swedish) is a concept store which was started by entrepreneur Carita Peltonen, after she suffered career burn-out and retreated to the forest to walk her dog. After taking time out to appreciate its beauty, she decided to take the healing benefits of the forest to the city.

The shop is an oasis of pine-scented calm, where tweeting is the soothing soundtrack of birdsong rather than communicating in 280 characters. The cynic in me notes that this particular brand of natural healing – items like organic linen sauna robes, sustainable tree hugger sweatshirts and bath salts infused with wild herbs – doesn’t come cheap.

Worth stopping for though, is the Mushroom Bar, a culinary concept from Finnish chef and the author of The Wild Herb, Sami Tallberg. Sami tells me he actually learnt to forage in Kent, while he was working in London, and began to admire the tenacity of mushrooms, which have to be strong to survive and are therefore packed with nutrients.

On a candlelit table decorated with driftwood and leaves I dine on earthy mushroom soup with seaweed, poached perch with roe and meadowsweet mousse with wild berries. Also prescribed by the ‘forest therapist’ is Champagne infused with medicinal herbs. It’s rounded off with a chaga and chicory cappuccino. Chaga, Sami tells me, is the tumour of the birch tree but one that helps to prevent cancer in humans.

I awake the next day to darkness but the sky has finally dawned an unfathomable grey by the time I leave the hotel, fortified by the cinnamon buns which I had been powerless to resist ever since I’d smelt them wafting out of the hotel’s snug basement bakery.

I’m meeting urban activist Jaako Blomberg, whose mission is to facilitate ‘participatory urban culture’. An unassuming man in an anorak with his long blonde hair in a pony tail, Jaako is behind some of Helsinki’s most high-profile events – like Cleaning Day, when the city turns into a giant flea market and everyone can sell, donate or swap the spoils of their spring-cleaning.

Helsinki Urban Art is also his brainchild and a way to enliven urban spaces with street art as well as giving a canvas to talented artists.

I meet him at his headquarters in East Pasila, a concrete jungle crammed with brutalist tower blocks linked by pedestrian walkways which criss-cross above the busy traffic.

This multi-cultural, inner-city estate has become a canvas of epic proportions. There’s an eight-storey mural depicting the creation of earth, a three-metre-high photo-realistic portrait of Jesus sporting a striped jumper with his crown of thorns, and the huge face of a hawk gazing piercingly into the rush hour traffic. Smaller installations include a bird box clinging to a lamp post which is a miniature copy of the tower block behind it – and a series of intriguing patterned and textured ceramic shapes clinging to the top of an underpass. On the greyest of days in the greyest of places, the art brings a sense of pride. 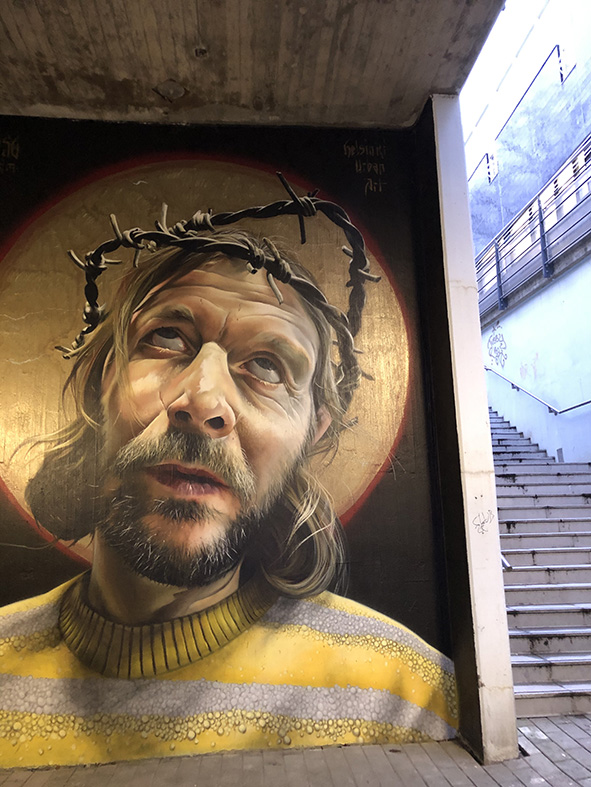 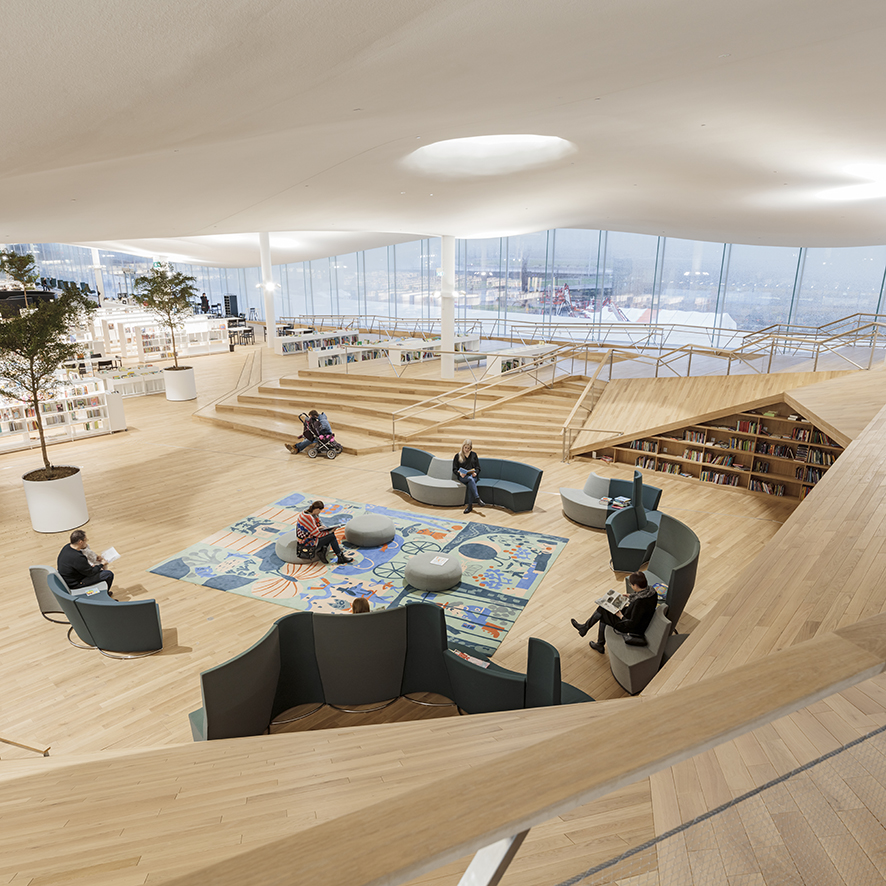 "A concrete jungle crammed with brutalist tower blocks has become a canvas of epic proportions... The huge face of a hawk gazes piercingly into the rush hour traffic"

Helsinki’s newest public space is the Oodi Helsinki Public Library, a futuristic structure of curving wood, glass and steel that is designed to be a public living room.

Access to libraries is a statutory right in Finland, but this place is not just for bibliophiles – it’s been designed with an open society and equal opportunities in mind.

A spiral staircase wallpapered in words leads from the meeting hall on the ground floor to a hobbyist’s heaven. At rows of computer desks people sit side-by-side studying and creating. There’s a room just for gaming; a series of rooms for hire including sound-proofed studios and a kitchen; and a bank of sewing machines as well as state-of-the-art 3D printers and laser-cutting machines.

On the top floor is a cathedral of books topped with a dream-like undulating ceiling and surrounded by vast windows which flood the space with light, despite the gloomy weather.

Perched on a planked wave of wood that flows down to the bookcases, people sit talking quietly, reading or tapping at laptops. There’s even a secret children’s reading nook behind a bookcase that swings open to reveal a fairy tale room designed like the inside of pumpkin. It feels like a port in a storm, where people come to together to dream and create.

But I must head to sea for the day’s final stop. Allas Sea Pool runs on sustainable energy and has three pools on a floating deck amidst Helsinki’s harbour, two heated and one just a gateway into the sea itself.

First I head to the women’s sauna, opting to wear a bikini since I’m too English for the alternative. I still find it a liberating experience and I think it’s the sense of togetherness. Women of every shape and size – some nonchalantly naked, some not – huddle together in this tiny wooden cave, steam hissing, hot water dripping down around us. There’s none of the snobbish hush you get in a spa – people chatter away – but it’s not like a noisy leisure centre either, it’s relaxing.

Once I’m sufficiently steamed I take my pink body out into the freezing Finnish night, pattering down the gangway like a lame duck. The lights of the harbour twinkle across the water, along with a passing ship, as I lower myself into the black abyss of the sea pool. A short, frantic splash across the width of it is all I can bear but once I’m out and the aching pain of cold subsides I feel amazing – euphorically happy in fact. Nevertheless I sink gratefully into the warm pool to float under clouds of steam and wonder how happy I would be if this was part of my weekly routine, like it is for the Finns.

On my last morning I finally get to the real forest, to visit Hawkhill, a Sustainable Travel Finland-approved collection of log cabins on the edge of Nuuksio National Park, 45 minutes from the city. It plans to be carbon negative by 2021, has rigorous recycling and serves only game or plant-based foods.

The plan had been to snowshoe but there is still no white stuff, much to the concern of everyone I’ve met. Co-owner Annu Huotari tells me, sadly, that the hares have already turned white but are now just fluffy targets bouncing around the still-brown undergrowth.

A walk through the forest is still magical. Wood-chip paths weave past moss- and lichen-covered trees up to a promontory overlooking the lake below, still and opaque like the back of a mirror. Anna tells me the park is home to bears, moose and even a pack of wolves but that guests staying in the cosy cabins can hike, kayak or snow shoe safely.

“The Finns have always had an affinity with the forest,” says Anna. “They see it as a place of safety, unlike many other European countries where tales like Red Riding Hood show a fear of it.”

Her business is third-generation, inherited from her grandparents who relocated from Karelia when it was ceded to Russia during World War Two. During a bitter conflict known as the Winter War the Finns were vastly outnumbered and out-armed by the Soviets yet they held out for months, Anna tells me, and hit the Soviets hard by using their knowledge of the forest and melting into it to evade capture.

Admittedly, I have always found forests a bit frightening, feeling like they could swallow me up somehow, but I’m starting to change my tune. On average, Finns are just 200 metres from one and while they are far from what I would call ‘tree huggers’ – quite the opposite, they seem to be pragmatic people as a general rule – an appreciation for trees is deeply rooted in the culture.

So what have I learnt from my trip to Helsinki? Definitely to come again because the weather was grim. But also: not to be scared of the forest and to embrace and look after nature; that libraries are always a good idea; creativity brings pride and joy; to finish my shower with a cold blast; and to eat more mushrooms. 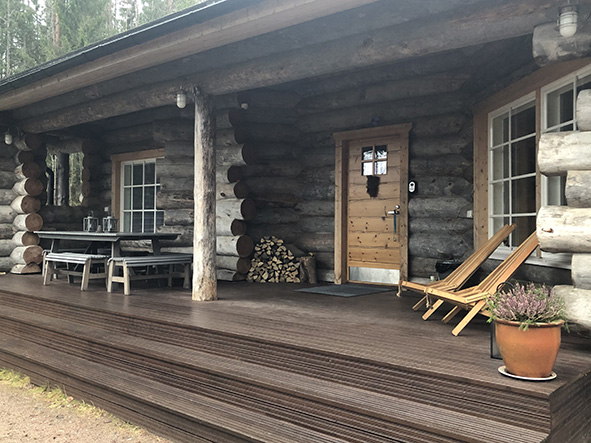 Support sustainable travel
Donate to the Travel Foundation to ensure that tourism brings greater benefits for people and the environment. thetravelfoundation.org.uk

Tree hugger?
Show your love for British forests with a donation to the Woodland Trust. It plants trees to combat climate change and stands up for forests in danger of destruction. woodlandtrust.org.uk