Two-plus hours by car from New York City and an hour from Philadelphia, Atlantic City (AC) on Absecon Island was established in 1854 and is an American seaside playground for the ages. My introduction to AC was sensational, seeing the Rolling Stones play historic Boardwalk Hall in 1989, and it’s been pure satisfaction ever since.

Hard Rock Hotel & Casino Atlantic City is one of six casino-resorts lining the ocean-facing Boardwalk. The signature rock memorabilia inside includes the menu from the original 1971 Hard Rock Café in London; Elvis Presley’s Rolls Royce; and tour uniforms from the Beatles, who played Boardwalk Hall in 1964.

Las Vegas-based titan Caesars Entertainment operates a trio of resorts, while MGM International’s luxurious Borgata is one of three properties in the bayside Marina District. 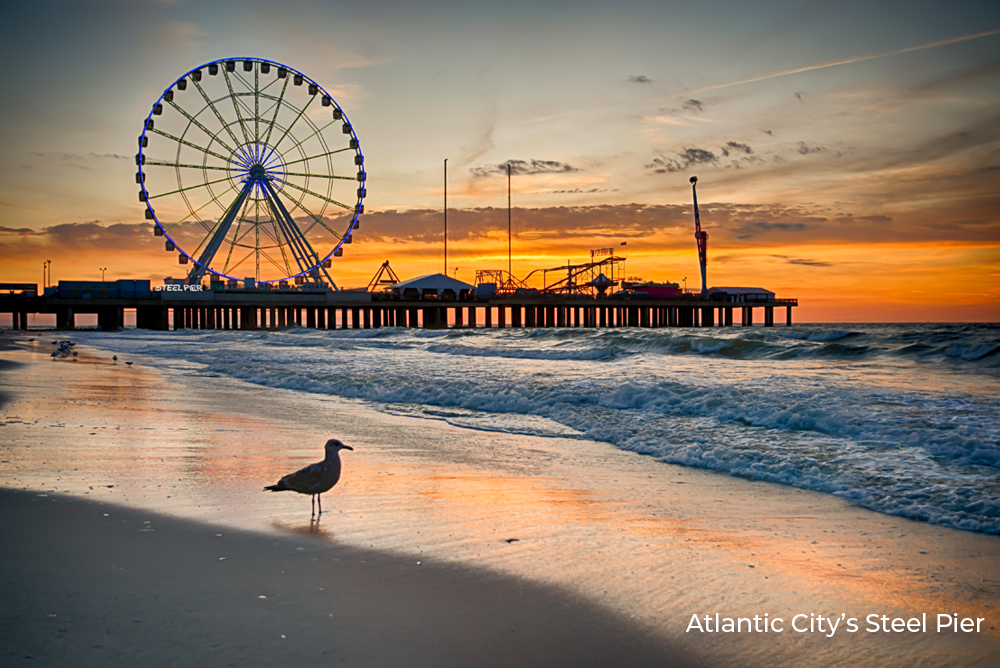 AC is a safe bet for foodies, offering up Gordon Ramsay and other swish celebrity outposts as well as historic eateries like Dock’s Oyster House (1897) and Prohibition-era Knife and Fork Inn (1912). Appetite boosters include strolling AC’s inviting
beaches, swimming in the Atlantic or cycling the iconic five-mile Boardwalk. 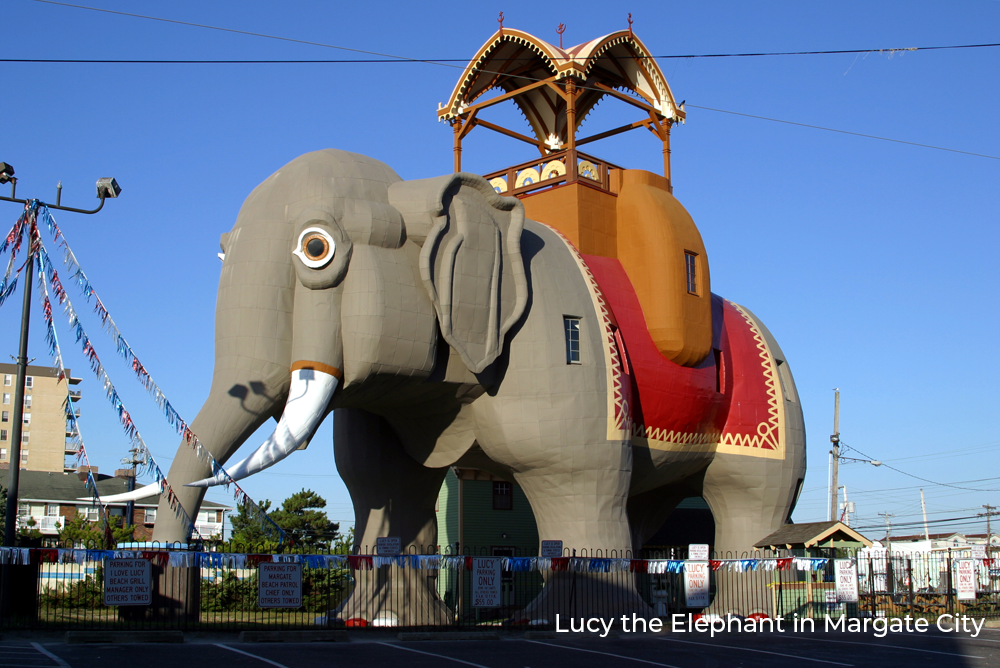 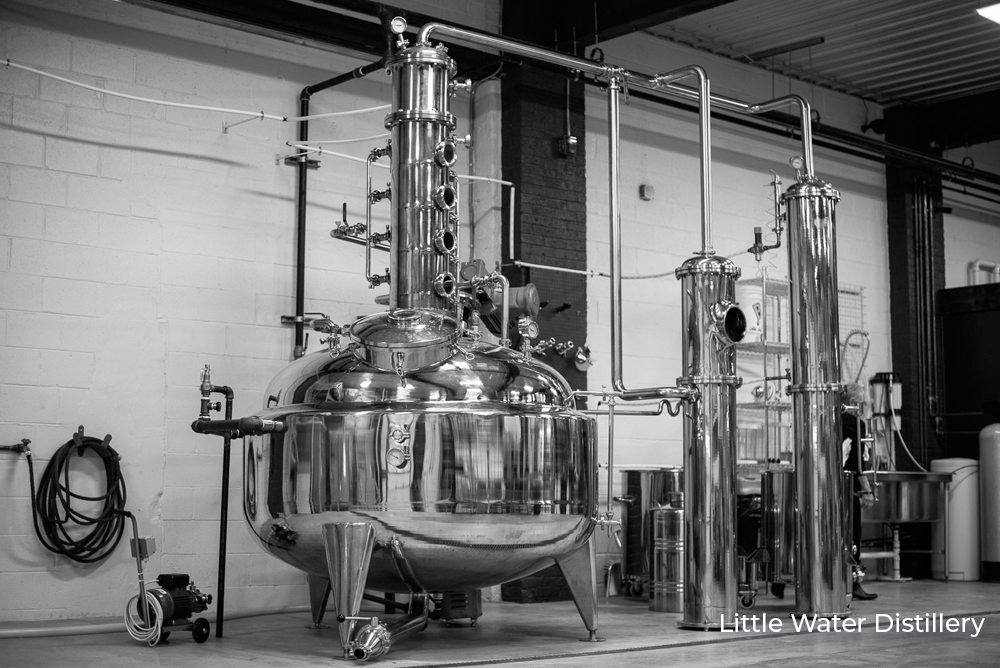 AC behind the scenes

You only need to head ‘downbeach’ from AC to Margate City to see Lucy the Elephant. Built in 1881 to promote local tourism and real estate, this lovingly restored six-story pachyderm is America’s oldest roadside attraction.

AC inspired the American version of Monopoly and the Orange Loop is where you can find the three orange streets from the U.S. board game. This is a dynamically evolving neighborhood of restaurants, bars, live music, coffee, yoga and more on the blocks just behind the Boardwalk.

Anchoring Absecon Island on the lower-third of the 130-mile Jersey Shore, AC’s proximity to other storied coastal resorts and inland attractions also provides for rewarding day or overnight trips.

Around 80 miles to the north, Asbury Park is another destination for rock pilgrims. Immortalized in Bruce Springsteen’s 1973 debut album Greetings From Asbury Park, this resurgent Victorian-era beach resort is known worldwide for The Stone Pony, the 1974 music temple where ‘The Boss’ along with Jon Bon Jovi and other area legends got their chops down. Lined with historic venues, including the 1,600-seat Paramount Theater, the Boardwalk was featured in the hit TV series The Sopranos. The boutique Asbury Hotel features a popular rooftop bar. 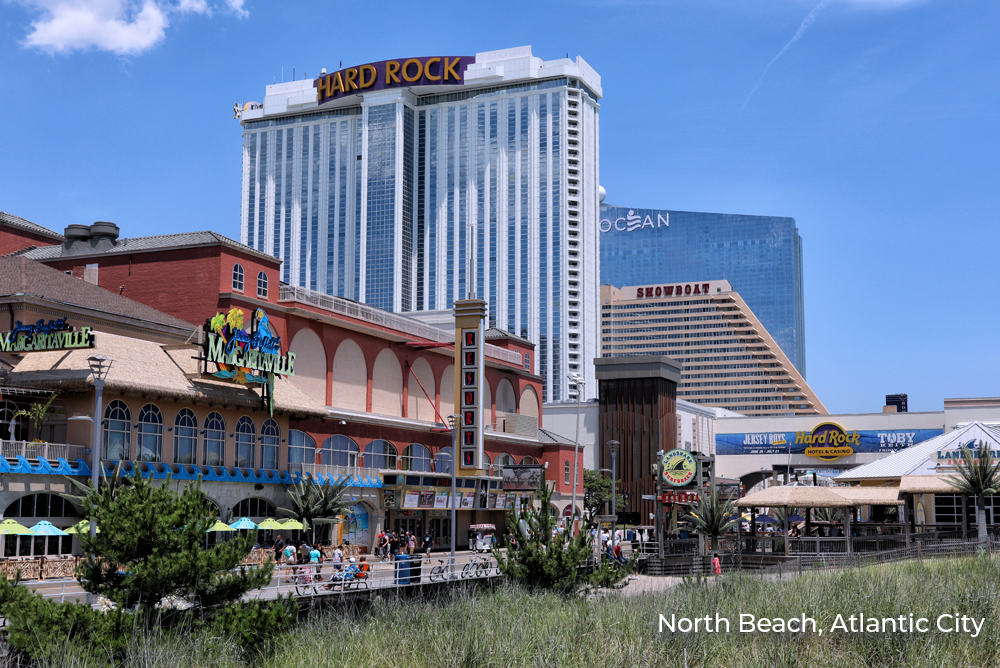 Just to the south is Long Beach Island, or LBI. Attractions in this causeway-accessible 21-mile barrier island and busy summer colony include panoramic views from Barnegat Lighthouse at the island’s northernmost tip.

Back on the mainland, Tuckerton Seaport & Baymen’s Museum is a maritime heritage village that celebrates the people, folklore, and history of the Jersey Shore. The 40-acre site includes 17 boardwalk-connected recreated buildings surrounded by maritime forest and a wetlands nature trail.

Bordering Atlantic County to the west, bucolic Cumberland County is for leisurely country drives and encounters with the past. Settled in 1686, Bridgeton is home to New Jersey’s largest historic district, encompassing more than 2,000 buildings. With its main Ye Greate Street laid out in 1684, time capsule Greenwich Township was one of America’s first ports-of-entry under British rule. Heritage venues include the Gibbon House, a replica of a London townhouse.

Surrounded by expansive farmland, the nearby Delaware Bay coastline was once a hotbed of oystering and caviar. Head to Hancock Harbor Marina to eat at the seasonal Bait Box restaurant or have a drink at the outdoor Liquid Therapy bar. There’s also a chance to see a fading Futuro House. Created by Finnish architect Matti Suuronen in the late 60s, fewer than 100 of these UFO-shaped pre-fab structures dot the globe. 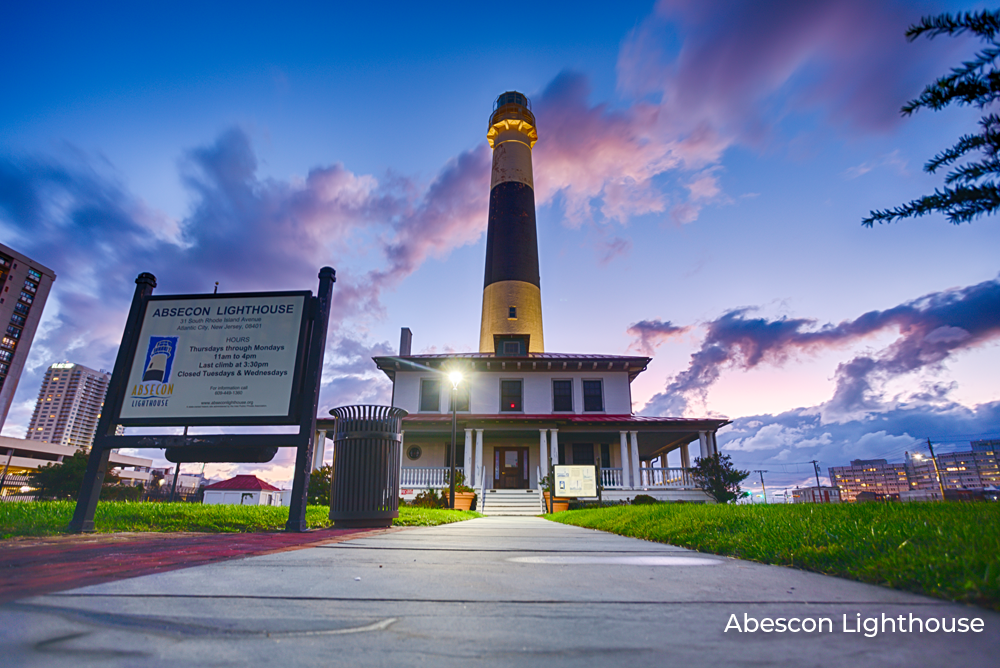 Ten miles inland from AC, in Galloway, the 1914 Seaview, A Dolce Hotel is a storied base for exploring the diverse attractions within 30 miles of AC. 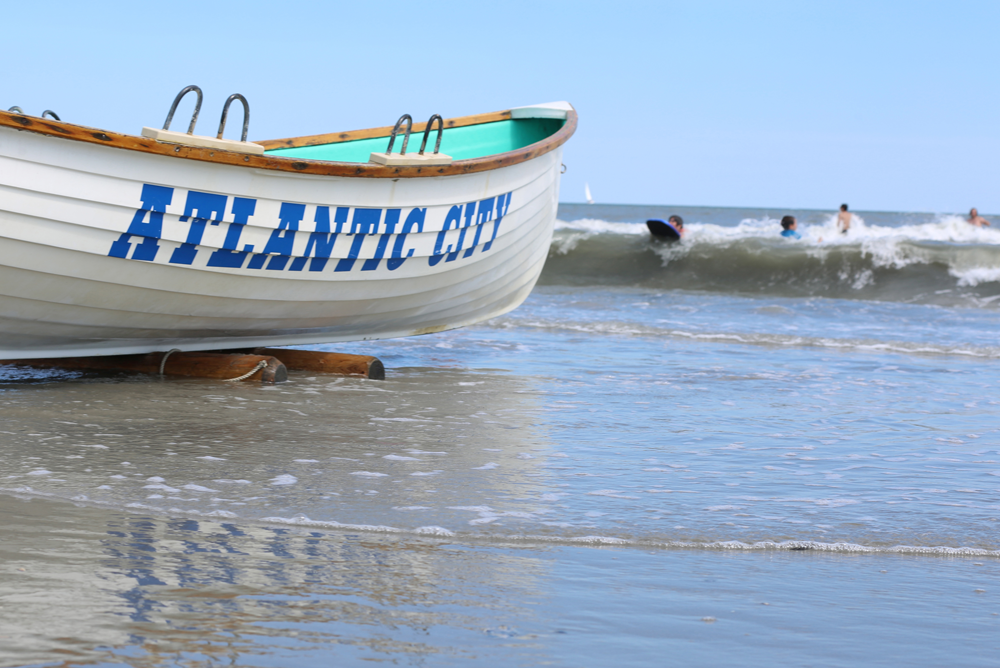 Once a stop for stagecoaches on the King’s Highway,nearby Revolutionary War-era Smithville Village features restored historical buildings, 80-plus shops and dining at the Historic Smithville Inn.

New Jersey is among America’s agricultural leaders and nearby Hammonton is the self-proclaimed ‘Blueberry Capital of the World’. Nearly 60 farms, or barrens, produce between 40 to 50 million pounds of the native fruit annually. Pick-your-own farms include DiMeo’s and Blueberry Bill.

An hour south of AC, The Wildwoods has claim as the cradle, if not the birthplace, of rock and roll. The post-WW2 rise of this collective of coastal communities on Five Mile Island included a raucous new sound from bands like The Treniers (who sang Everything’s wild in Wildwood and Wildwood by the Sea) and Bill Haley & His Comets, who first performed Rock Around the Clock – rock’s first record – here in 1954.

The Doo Wop Museum features the Doo Wop Experience and Neon Sign Garden. Annual events such as the Fabulous ’50s & Beyond Weekend, with 1960s British legends Herman’s Hermits routinely on the bill, enhance the retro ambiance.

Just below the Wildwoods, picturesque Cape May, famed for its Victorian architecture, is America’s oldest seashore resort – founded in 1761. The circa-1869 Gingerbread House is among several B&Bs in the historic district. Other restored grande dames include the Virginia Hotel, now a 24-room boutique, and the 106-room Congress Hall, known locally as the Big House, which features an underground pizzeria and club in its old boiler room. Two miles out of town in the 62-acre Beach Plum Farm with five historic cottages and barns for overnight stays.

Attractions include the free-admission Cape May Zoo and world-class birding at the Cape May Bird Observatory. At Cape May Point’s Sunset Beach, look for the half-sunken USS Atlantus, an experimental concrete ship from WW1. 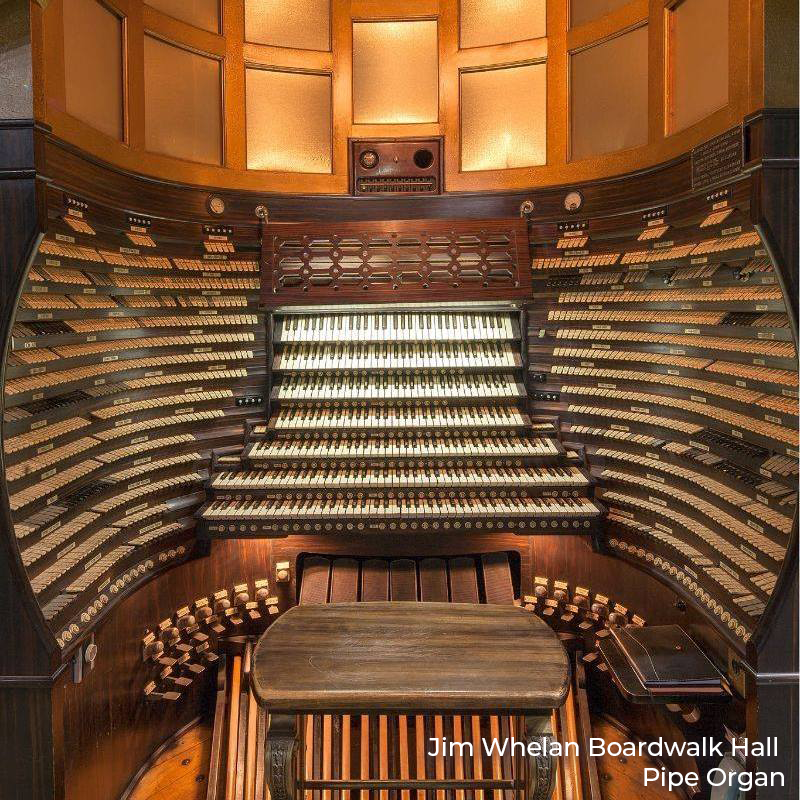 Find out more about Atlantic City!