Are you itching to leave the country or is your passport firmly wedged in your desk drawer? It doesn’t matter because we have some ideas for holidays in the UK and abroad which are surprisingly similar, says Laura Gelder

The British Isles might be small, but they are spectacularly diverse and what we lack in sunshine (sometimes) we make up for in historic towns and cities, handsome countryside and a long and lovely coast. Gone are the days when a staycation was seen as a consolation prize. Now people are waking up to the stunning places on their doorstep. Of course, going abroad is always exciting and a chance to discover new cultures, taste new foods and get a different perspective on the world, but what if you could find what you’re looking for right here at home? Instead of flying to Italy to see the rooftop villages

of Tuscany, drive to the Cotswolds in England to find some of the world’s most idyllic villages. Instead of taking the Rocky Mountaineer train through Canada’s rugged country, you can take the Jacobite Steam Train in Scotland and pass our tallest mountain, Europe’s deepest lake and cross the famous and spectacular Glenfinnan Viaduct, made famous in Harry Potter. Read on for two options, one here and one abroad, for seven very different holidays. So, whatever the British government decides and however you’re feeling, there’s always a way to get away from what you know and explore somewhere beautiful.

Think of a classic French scene and you might imagine someone cycling through fields of sunflowers or lavender, perhaps with a baguette in their basket, or lines of beautiful vines. Provence is famous for its purple fields and hilltop villages with crumbling chateaus, as well as being the country’s biggest producer of rosé wine. East of Paris, the Champagne region is bursting with sunflowers as well as vineyards and cycling is a smart way to ensure you can taste its famous bubbly. 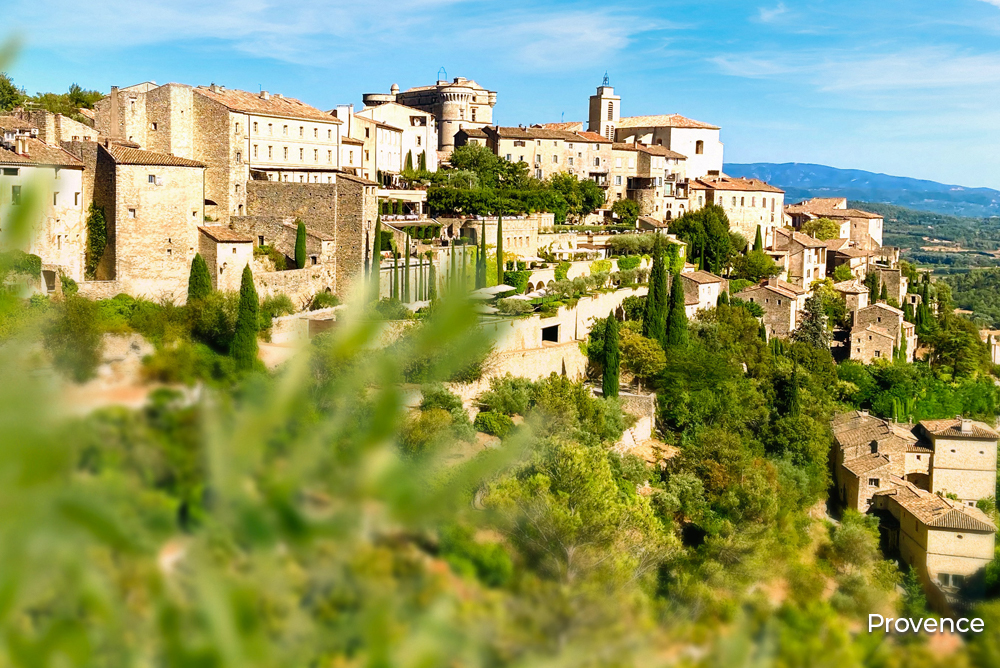 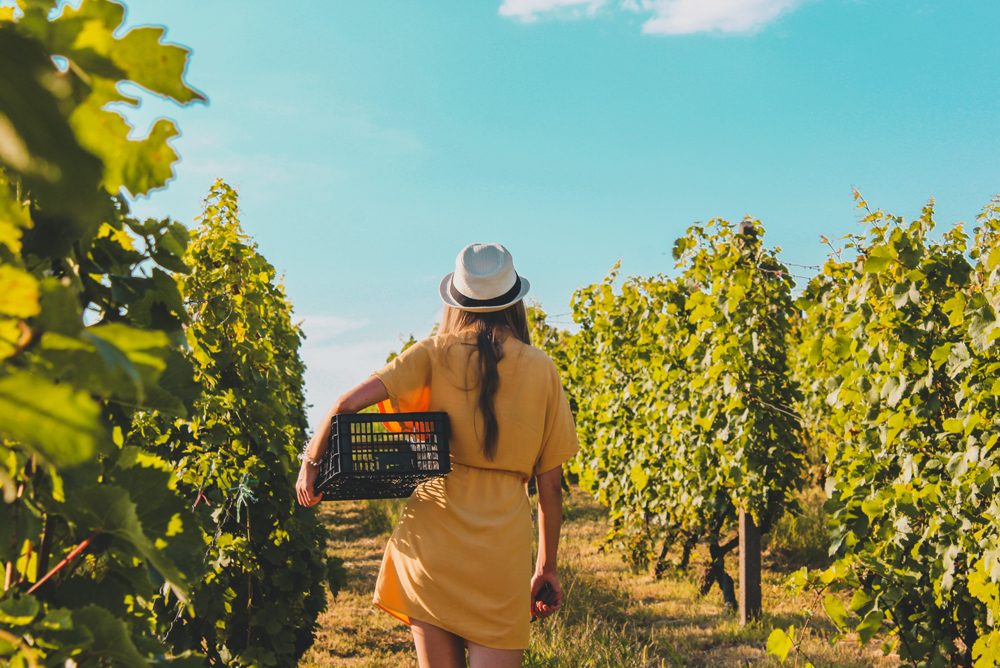 Perhaps the only benefit of climate change is that the south of England now has the perfect climate for creating sparkling wine – so good, in fact, that French Champagne houses are hurriedly buying up land there. There are many vineyards in Sussex offering tastings, ranging from the established and traditional Bolney Wine Estate near Brighton, to the new and innovative House Coren, which is incorporating the same method used for Prosecco to create its fresh and fruity sparkling wine, Boco. If you’re still missing France, head to Lordington Lavender’s purple fields – who needs Provence? 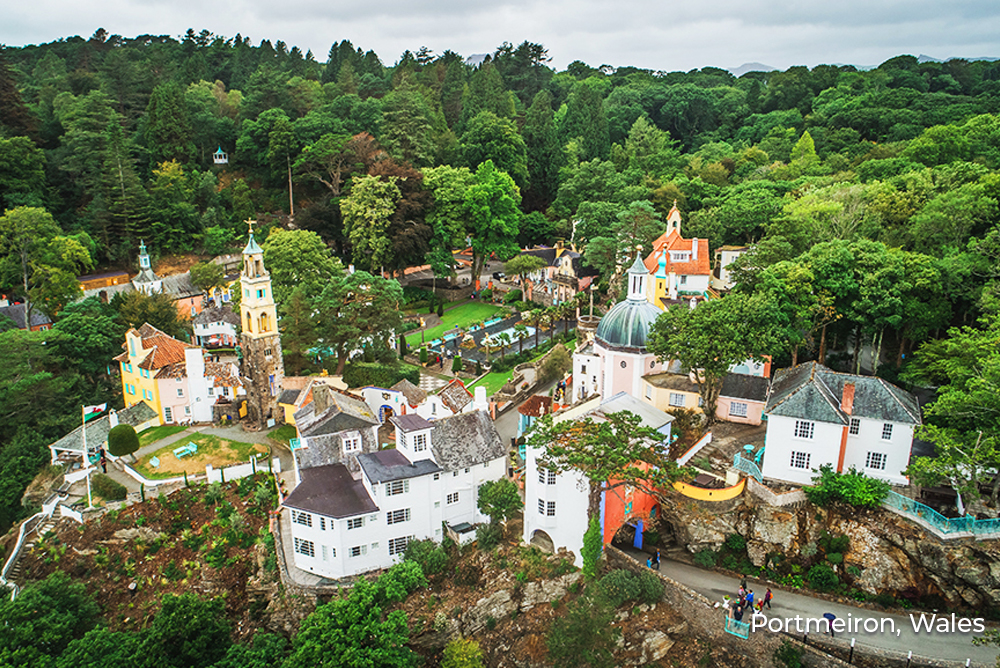 Portmeiron and the Welsh Coast

Believe it or not, a slice of the Italian Riviera exists in Wales. Portmeirion is a private village built in the early 20th century and where the cult 1960s TV series, The Prisoner, was filmed. Set on the estuary of the River Dwyryd, it’s a vivid tribute to Italy with two hotels, a spa, boutique shops, award-winning restaurants and a gelato parlour. Italianate features include its terracotta-roofed houses painted in bright colours, exotic gardens and a campanile, or bell tower. From here, hit the Welsh coast for sweeping beaches, cute fishing villages and theatrical cliff-top views.

The Amalfi Coast is as dramatic as an Italian love story, a series of precipitous, lush peaks plunging into the azure Tyrrhenian Sea with heart-breakingly beautiful villages clinging on for the ride. Don’t miss Ravello, with its polished piazza and al fresco cafes, romantic terracotta-roofed villas and gardens bursting with blooms. Check out Positano too, you’ll find a cascade of pink, peach and terracotta houses tumbling down to the coast, where sun-baked Italians sip Aperol Spritz. 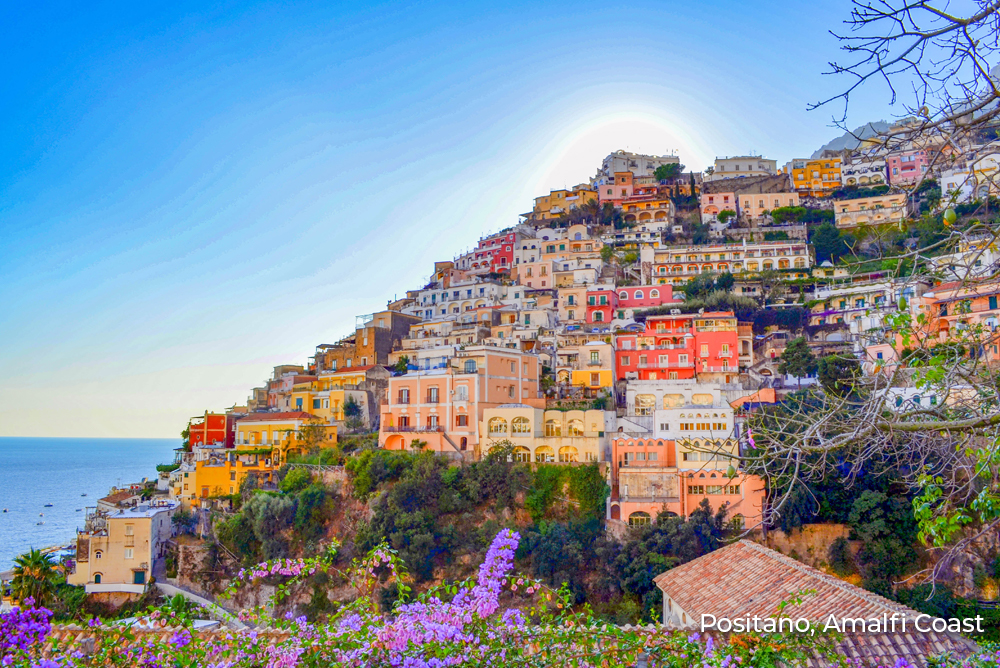 This 186-mile scenic highway winds around the northern coast of Cape Breton Island, part of Canada’s Atlantic province Nova Scotia. The journey opens up sparkling ocean vistas and winds past lush, forested river canyons and ancient rock plateaus. Enjoy the rugged but accessible hiking of the Cape Breton Highlands National Park and spy moose and bald eagles. Sample the lively Gaelic pubs and taste the legendary local lobster or do a kayaking or whale watching trip where you can see minke or pilot whales. 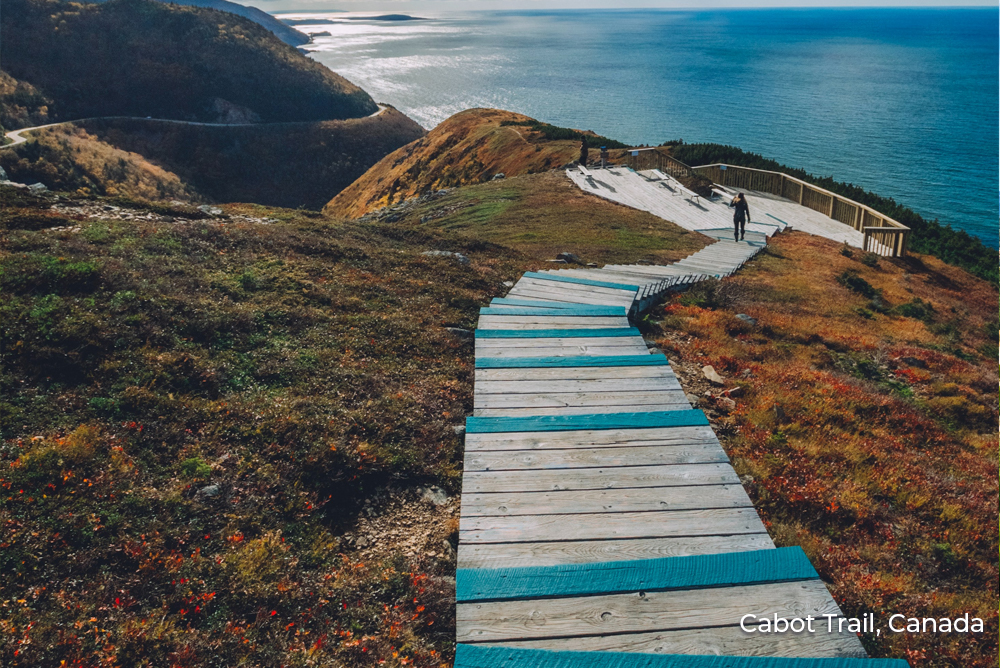 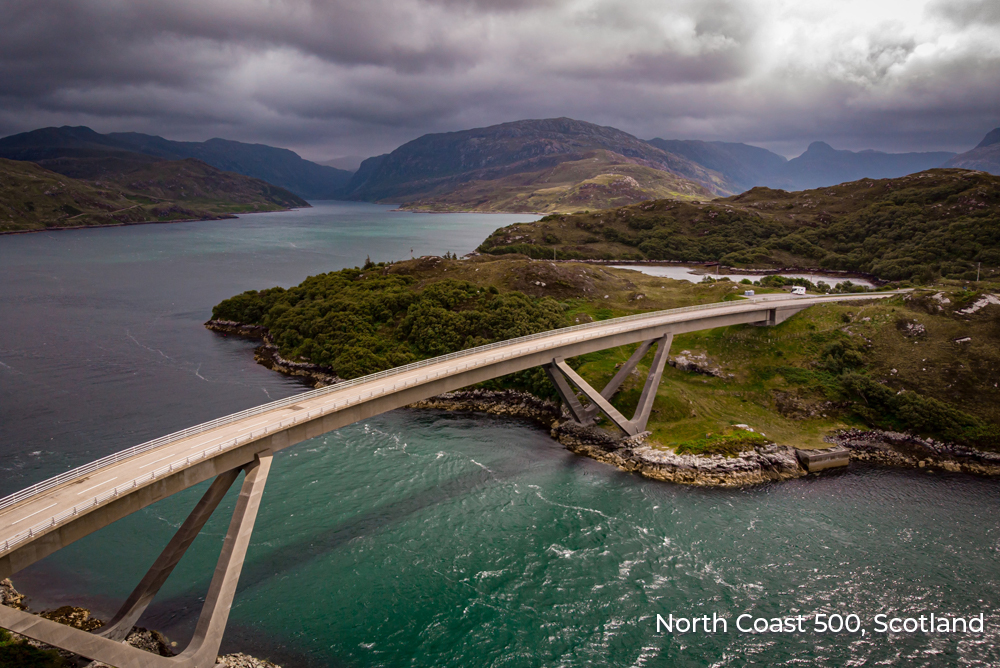 Hugging the coast of northern Scotland for 516 miles, this route starts and ends at Inverness Castle and passes the top end of Britain at John O’Groats. You’ll pass glimmering lochs, purple heather-smothered glens, craggy peaks and wild coast. You’ll see shaggy highland cattle, majestic red deer and maybe a golden eagle. Take at least a week to fit in hikes, haggis, whiskey tastings and highlights like the vast sea cave of Smoo with its interior waterfall; the romantic ruins of Ardvreck Castle looking over Loch Assynt; dramatic Corrieshalloch Gorge with its Victorian suspension bridge and the russet sands of Red Point Beach. 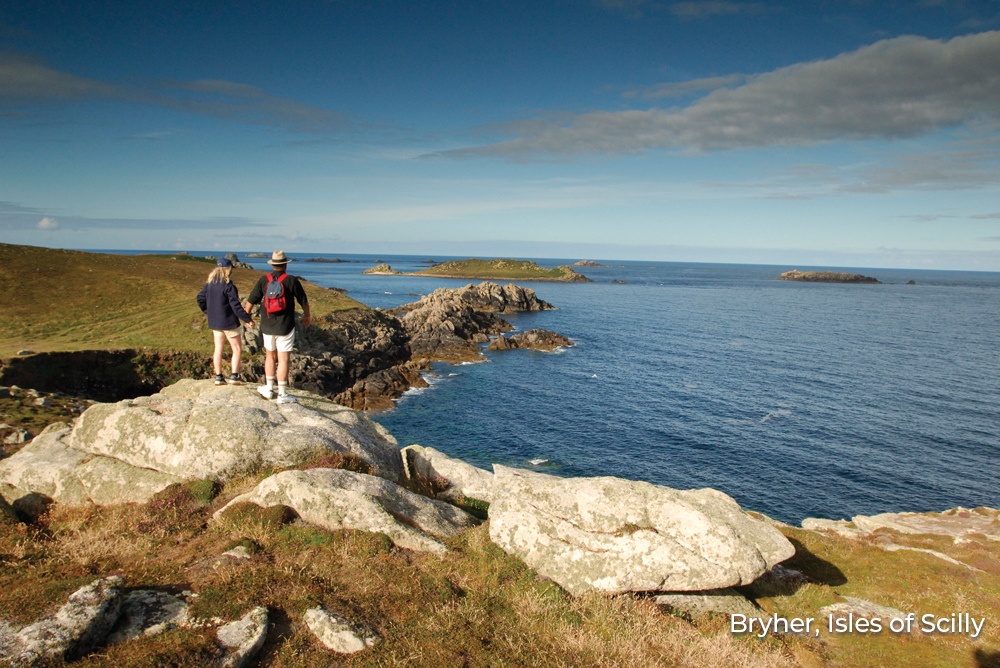 The UK's Isles of Scilly

Floating south of Cornwall are five inhabited islands – St. Mary’s, Tresco, St. Martin’s, Bryher and St. Agnes, plus countless uninhabited ones to explore. The pace is slow in the Scilly Isles, with few cars and no big cites. You’ll feel like you’ve stepped back in time when you notice the honesty boxes dotting the hedgerows and offering fresh local produce for sale. Explore gorgeous white sand beaches, exotic gardens bursting with succulents and palms and quaint villages. Relax and eat crab sandwiches or have an adventure and swim with wild seals.

The Islands of Greece

Greece is so spoilt for beautiful islands that it’s almost criminal to visit just one. You could choose the glamorous Cyclade islands, which includes Mykonos with its stylish waterfront bars and white-washed windmills. Or head north to the pine-shaded Sporades, including Skopelos where Mamma Mia was filmed. Or go west to the mountainous Ionian Islands with their Venetian streets. Wherever you go you’ll find ancient history, sun-soaked beaches and delectable food. 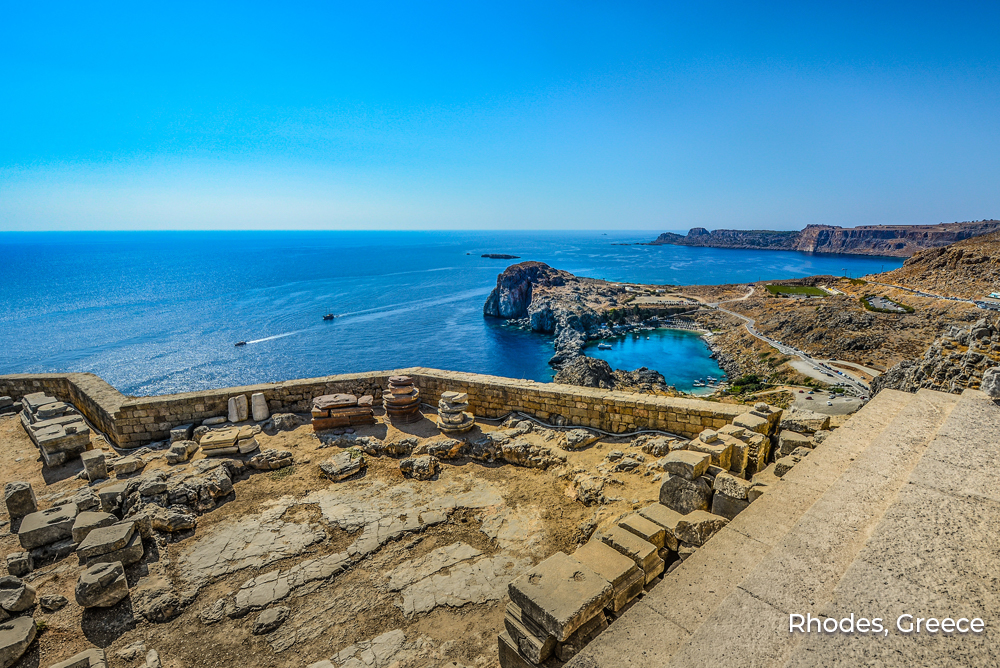 Between Rüdesheim and Koblenz, Germany’s River Rhine cuts deeply through mountains smothered in steep vineyards and some 20 romantic hilltop castles, complete with fairy tale-esque turrets. Around each bend of the mighty river, quaint villages with half-timbered houses and Gothic churches offer respite for weary travellers and a place to sample the local beers and fruity Riesling wine. 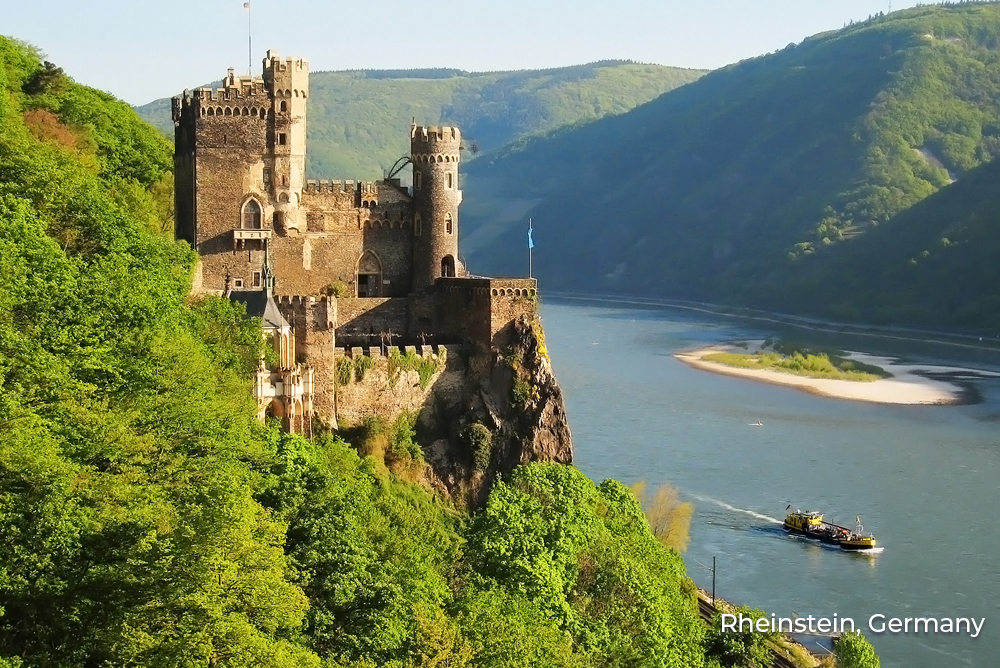 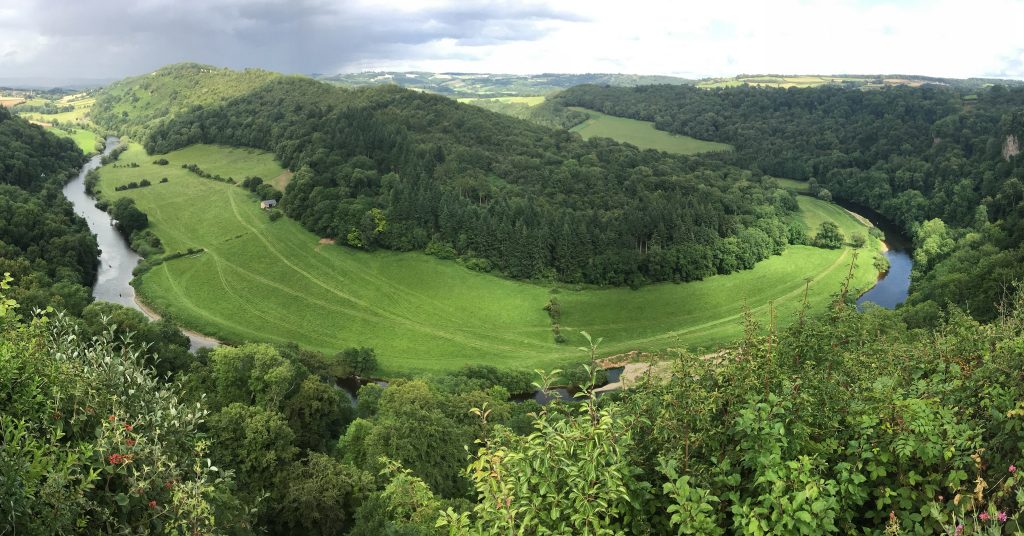 Close to the border with Wales, the River Wye meanders through a picturesque, green valley, a historically strategic area still dotted with castles. Perched high above the Wye River on limestone cliffs, Chepstow Castle is the oldest surviving post-Roman stone fortification in Britain, built in 1067. The Wye Valley Hiking Trail starts here and continues for 136 miles, crossing ravines and gorges, meadows and woodlands. Don’t miss the gothic ruins of Tintern Abbey or the spectacular view of a dramatic river bend from Symonds Yat Rock. 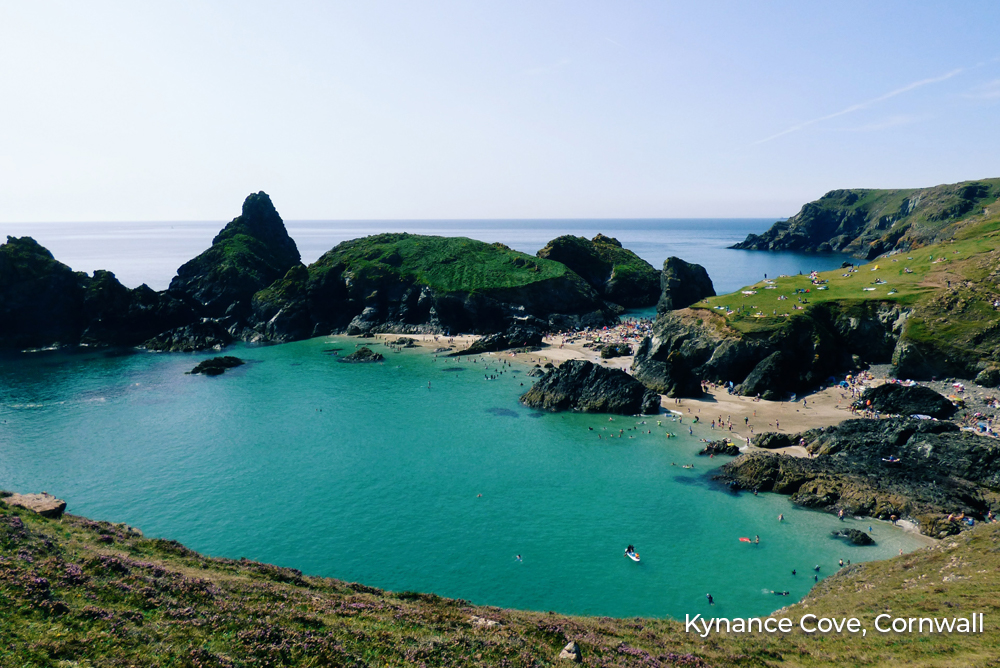 Jutting 10 miles out into the Atlantic Ocean, the Lizard is the most southerly point in mainland Britain, but its dramatic coast and remote feel are worth the effort, just don’t get lost on its rambling single-track roads. Its most famous beach is Kynance Cove, a snug green inlet lapped by turquoise water and protected by towering rocks and sea stacks. Don’t miss the drama of Lizard Point where you can stand beneath the lighthouse and spot seals, dolphins and basking sharks, the pretty villages of whitewashed cottages like Coverack and the tropical gardens of Trebah.

There’s something about the Andaman Sea’s craggy isles that captures the imagination. The vertical forest-smothered limestone karsts look like impenetrable pirate isles, towering over some of the most postcard-perfect beaches in the world. Don’t miss Koh Hong with its white sands and hidden emerald lagoon, surrounded by tiny uninhabited boulders. Or head to Koh Phi Phi Leh where The Beach was filmed. 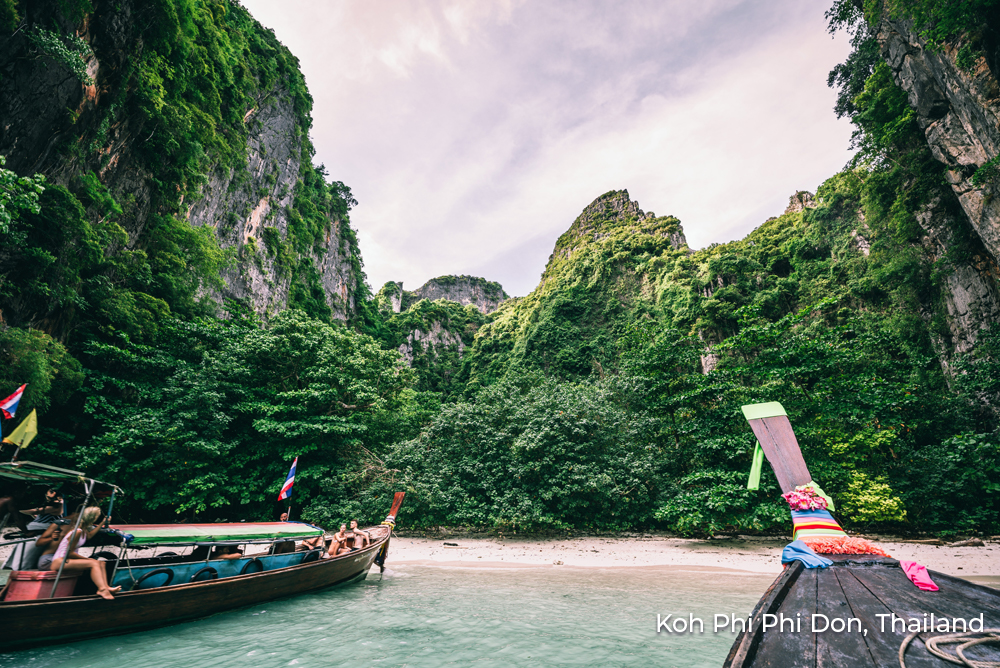 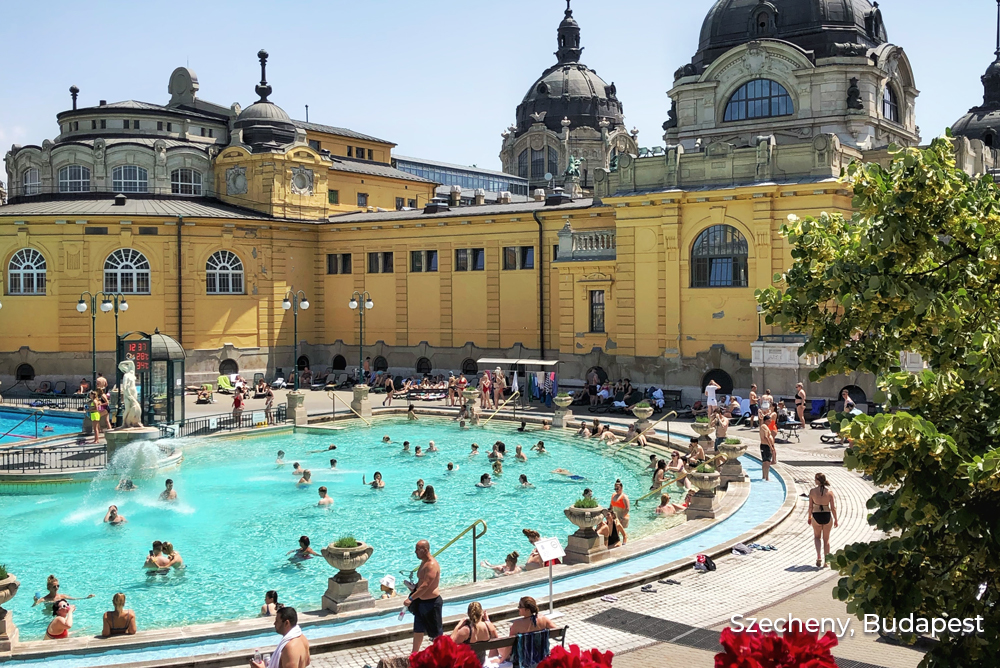 The honey-hued architecture of Bath certainly has the same grandeur as Budapest, most evident in the stately perfection of the Royal Crescent, a famous semi-circle of tall and columned Georgian townhouses. When your feet are tired from walking the streets, you can always check into the spa. Bath is so-called because it’s home to one of the world’s best-preserved Roman bathhouses. Sadly, it’s for looking, not bathing, but the modern Thermae Bath Spa has a relaxing and steamy pool looking out over the city’s rooftops.

Hungary’s capital hugs the River Danube with its beautiful jumble of baroque, neoclassical and art nouveau architecture. It’s a place to wander slowly so you can really take in the grand squares and get lost in the cobbled streets where small cafes beckon. Budapest is blessed with an abundance of hot springs and has been a place to relax since Roman times. Széchenyi bathhouse was built in 1913 and the neo-Baroque palace in Budapest’s City Park houses 15 indoor pools and three huge outdoor pools. 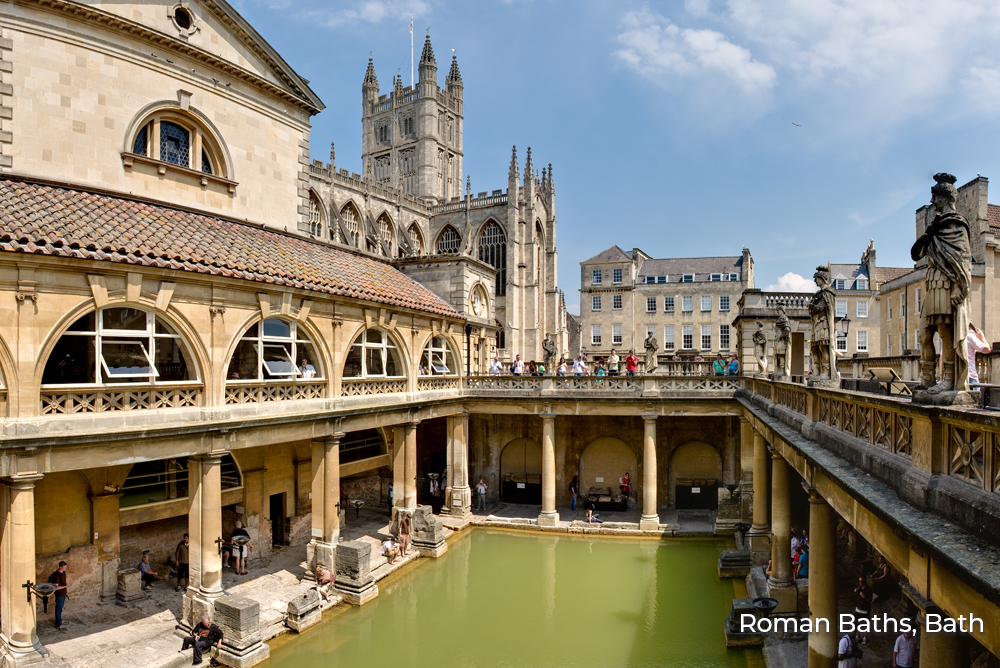