Tangier’s bohemian history and eclectic shopping can be twinned with the Blue Pearl of Chefhaouen to create the perfect Moroccan city break, says Lynn Houghton

Below a searing blue sky, the air is suffused with the sweet odour of animals and the cacophony of haggling is intoxicating. Each building – some cream coloured, some brightly painted – is tucked in a higgledy-piggledy fashion next to the other along the narrow streets and many are adorned with deftly designed stone arches or filigreed doors. This part of the medina focuses on food and the smell of freshly baked pastries and breads wafts in the air as I squeeze past the tiny wooden carts they are piled on, passing colourful spices, fruit and vegetables too.

Tangier teeters on the cusp between Europe, Africa, and the Middle East. Separated from Spain’s Andalucía by only 100 km of water, there’s one main cultural difference between them (one which has created an intense conflict over the centuries) and that’s religion, though Andalucía was ruled by Islamic North Africa for over 500 years.

Much like seeing my name in Arabic for the first time (the undulating scroll is so much more romantic than Times New Roman), entering the Medina offers an almost quixotic buzz. Our group started the tour outside the old city in a small grassy square lined with bohemian cafes and dotted with benches where locals smoked or sipped coffee. Steps away, the exotic and ancient Medina is like another dimension where nearly everyone – men and women, old and young – is dressed in the traditional Djellaba, a loose and flowing robe with a pointed hood much cooler than close-fitting Western clothes and infinitely more mystical in appearance.

Moving deeper into this warren of tiny streets, a wider variety of shops and stands appear, all of which have neatly displayed wares covered with awnings to protect from the heat. There’s an incredible selection of leather: wallets, shoes, bags, babouche (soft slippers) notebooks and more. Also piled high are lanterns, rugs and carpets, olive oil, organic soaps, and ceramics. Haggling is the norm here but there are few price tags for you to gauge the starting bid.

I can’t help noticing little alleys every so often, leading to temptingly shady courtyards with tiny gardens. Oh to wander into them and have a nose around!

Often called the gateway to North Africa, Tangier had a succession of rulers, starting with the Phoenicians in the 10th century B.C. and followed by the Romans, Portuguese, Spanish, French and British. By the time France granted Morocco independence in 1955, it was known for its free-wheeling and liberal attitude.

Booze-soaked and hash–fuelled creative sessions at hotels and cafes drew the Beat generation of the 1950s here – Jack Kerouac, William S. Burroughs, Allen Ginsberg, Tennessee Williams, and even Truman Capote. Tangier’s perhaps slightly too liberal attitude soon had it teetering on the edge of decay but I’m told when Mohammed VI came to the throne in 1970, he saw that the city was cleaned up. 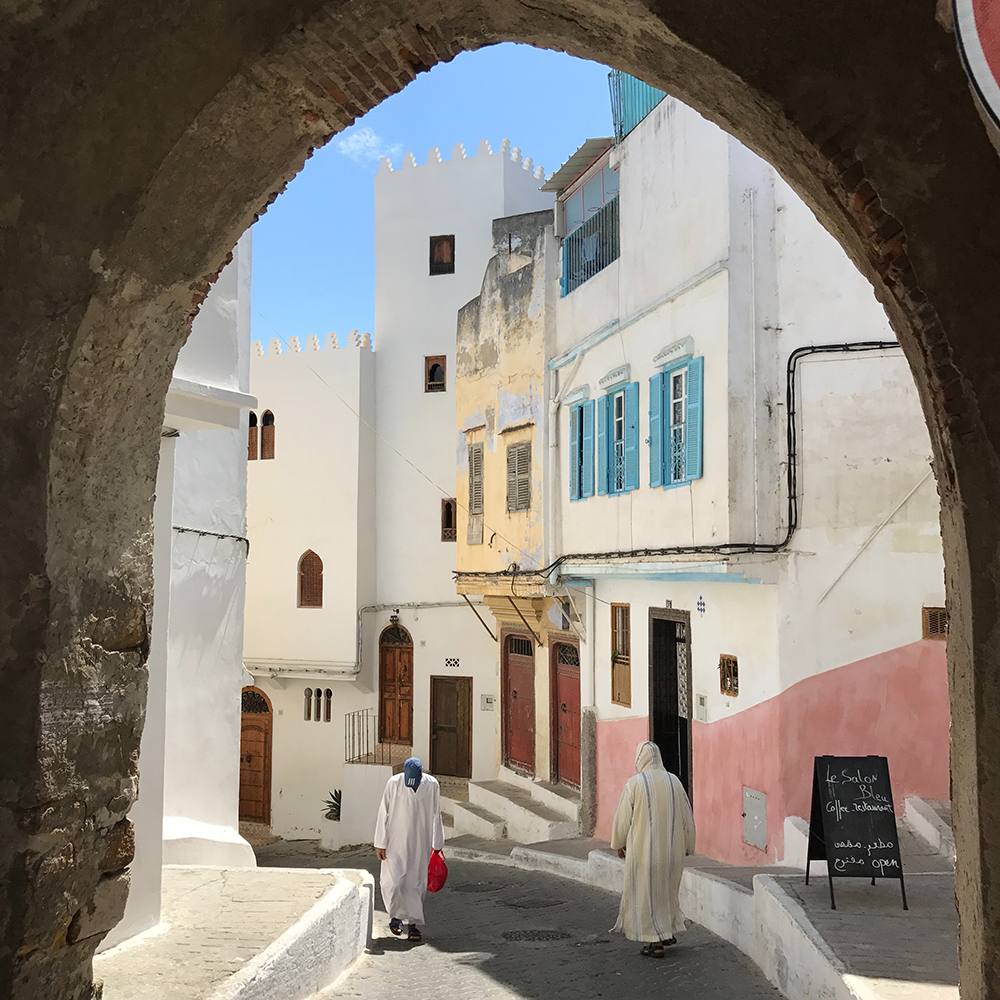 As a travel writer, I can’t pass up the chance to pay a visit to the tomb of Ibn Battuta, a famous Moroccan itinerant who travelled most of the world in the 14th century before returning to his hometown. He’s now tucked away forever in the tiny back streets of Tangier and a small dome with a plaque honours his adventurous spirit.

I stumble across the Légation Américaine de Tanger; the oldest U.S. diplomatic property in the world. Morocco was the first country to recognise the U.S. as being independent from Great Britain and the ruling Sultan of that time gave this tranquil property to the Americans in 1821.  Though it’s no longer used for diplomatic purposes, the enormous dining room is still decorated as it would have been for formal events and the art and 19th century photographs adorning the walls give a time warp feel. 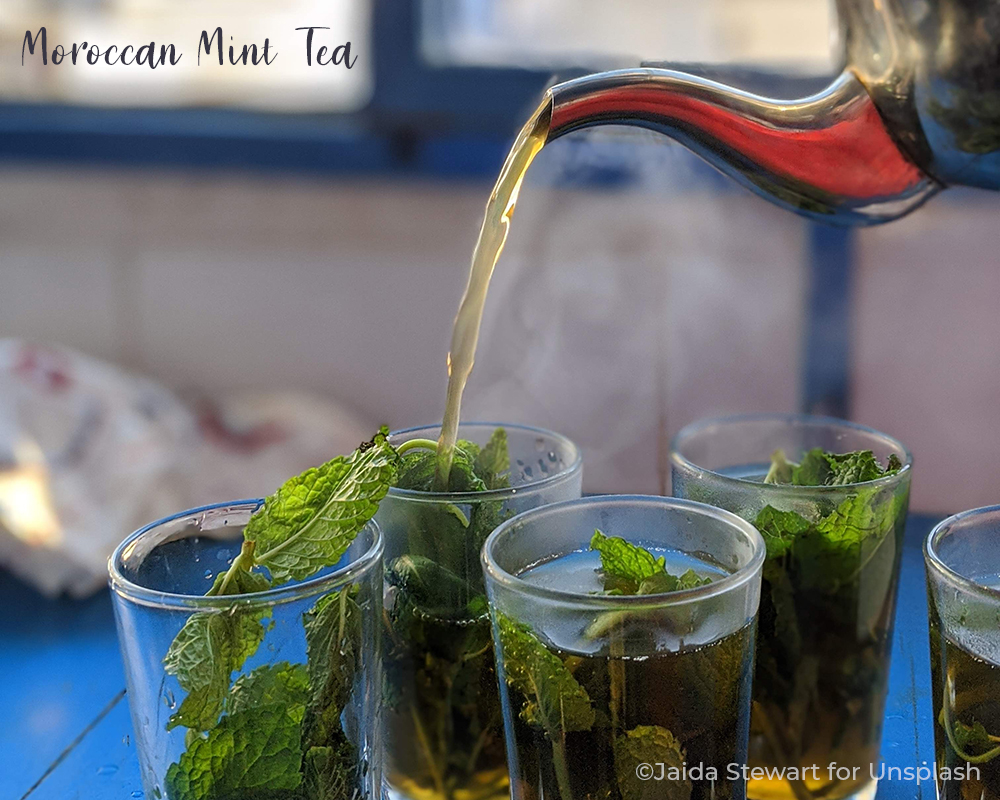 I have a cup of mint tea at a small café before approaching the fortified section of the city – the Kasbah. Built during medieval times, it’s perched at the top of the old medina with an enormous entrance gate into yet another world. Here, there are fewer people about and the atmosphere is more exclusive. Yes, the Kasbah has become quite upmarket these days – replete with bars, chichi boutiques, and restaurants.

Alongside the famous, traditional Porte Verte, or ‘green door’ I pass a

bohemian night club and designer Laure Welfing’s high-end boutique. After walking down a long corridor with a high ceiling, I emerge into dazzling daylight and spectacular views out to the sparkling Strait of Gibraltar.  The Salon Bleu is an upmarket restaurant with a terrace unashamedly capitalising on these views.

On exiting the old town, a woman dressed in djellaba throws me a disconcerting glare. I realise my camera is causing offence and put it away. As photogenic as every corner of this city is, you must ask permission before snapping. As the haunting call to prayer breaks like a gentle wave over the rooftops, it’s time to return to the hotel for an early night.

The new Hilton Tangier Al Houara Resort and Spa lies on the coast about 20km from Tangier’s city centre and has the appearance of Grenada’s Alhambra. The building is a cool marble haven, punctuated with pools and fountains throughout. Once indoors, high ceilings encourage air to flow and I find it impossible to pass the enormous lobby’s comfortable bar, a welcome place to flop after a long day’s exploring.

The next morning I explore the sprawling 330-hectare property, which has just 304 rooms. Outside, the views are even more captivating. More marble landscaping tumbles down towards the sea – there’s an al fresco restaurant, swimming pool and lounge area, finally arriving at the white sand beach. As well as a golf course there are stables with stunning Arabian horses waiting for any guests who would like to take a ride on the beach. 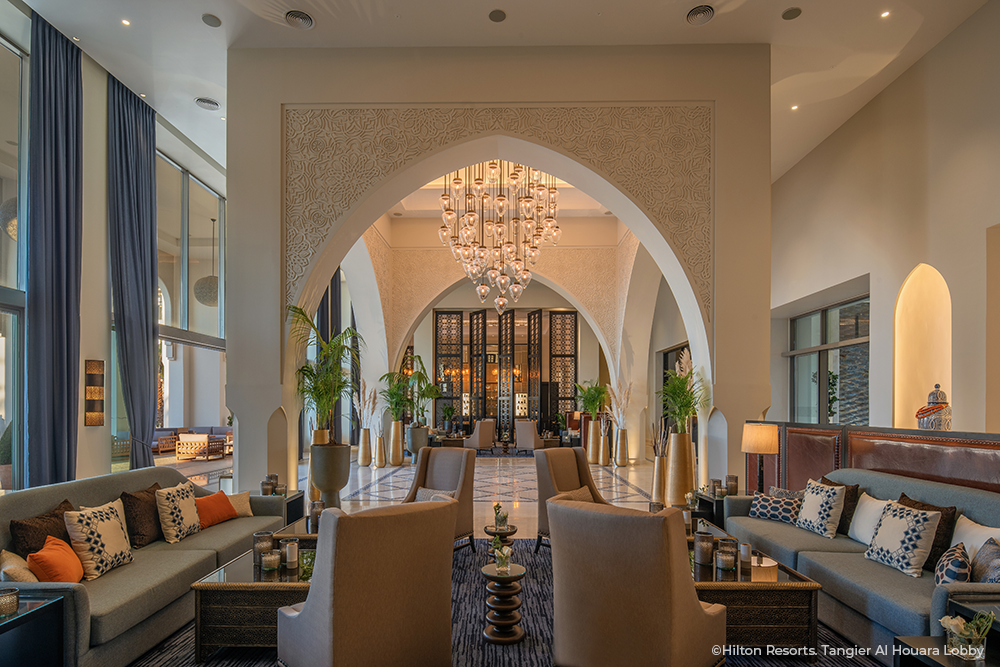 Without a doubt, my favourite part of the hotel is the spa.  The traditional Haman offers the usual steam and rub-down treatment as well as massages, a beauty salon and yoga classes on request.

As part of the hotel’s sustainability efforts, an organic garden is has been created, a joint project between the engineering and kitchen teams which allows the hotel to grow its own ingredients for the impressive dishes on its menu, which offers everything from traditional Moroccan tagine to European-style fine dining.

My last day is dedicated to the mountain village of Chefhaouen, known for being painted entirely in shades of blue. This Instagram-friendly gem is located in the Rif Mountains at an altitude of 564 metres – cool and suave in comparison with the heat and chaos of other Moroccan cities. Founded in 1471, it has nevertheless experienced its own tales of upheaval and turmoil.

I ask our guide the obvious question: “Why is everything blue?”  Allegedly, he tells me, it is a reference to the sky and heaven, a reminder to lead a spiritual life.  Another theory is that it was painted blue by the Jewish community who arrived between the 15th and 17th centuries after being expelled from Spain. Many people today think it is kept like this for the tourists but I can’t say I mind if that’s the true answer.

Every alleyway and apartment, each restaurant and shop as well as all walls and fences are painted different shades of blue – exotic turquoise, dazzling cobalt, and calming indigo. In the souk are the ubiquitous leather goods, cotton clothing, candles and pastries but also enormous bags of dried paint in a variety of bright colours – perhaps for artists or just for locals to keep the town freshly bathed in blue. 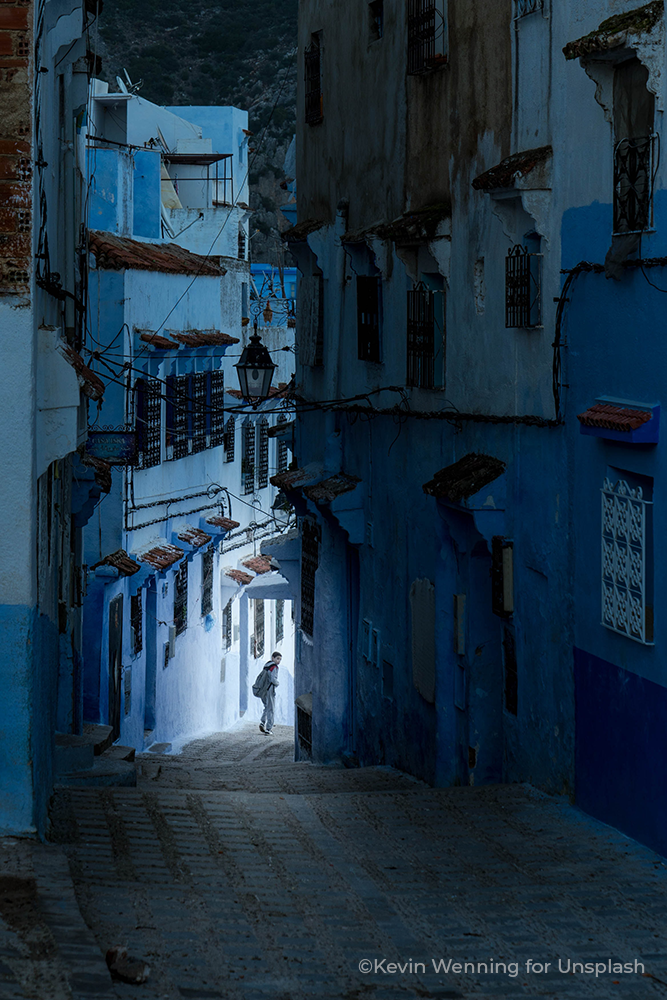 I’m reminded of the Greek islands, thanks to the blues but also to the feral cats which seem to be curled up in every corner, stalking every wall.  The downside of being an animal lover is the desire to rescue all these straggly strays.

In the shady and popular main square of Place Outa el Hammam is the refreshingly
red-walled Kasbah, a 15th-century fortress and dungeon which was constructed to ward off the Portuguese invasions and later became a prison.

But the highlight of Chefhaouen is the traditional lunch I enjoy in Lala Mesouda, a lamp-lit, stone-walled restaurant hidden off the main shopping street. I tuck into tagine – slow-cooked meat, chicken or vegetables accompanied by the ubiquitous round loaves of bread, washed down with mint tea and topped off with M’hanncha, a snake shaped dough filled with almond paste and dates. 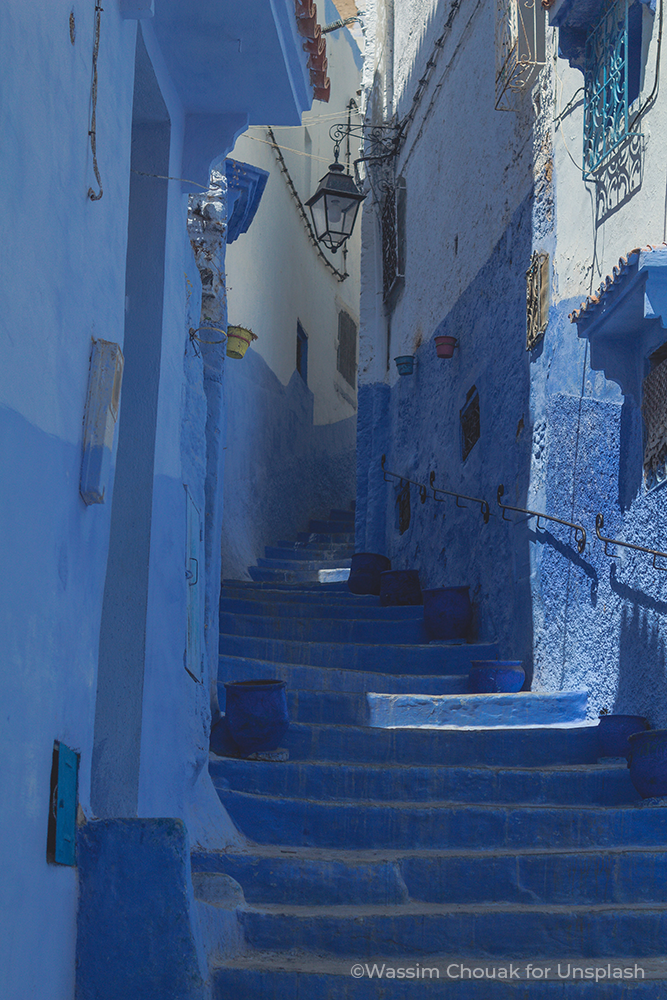 Pastries are loved all over Morocco – sweet, savoury or both, like Basteeya. This triple-layered pastry combines shredded chicken, eggs, a lemony onion sauce and sweetened almonds enclosed in tissue-thin pastry and sprinkled with a layer of sugar and cinnamon. It’s a snack as multi-layered as the country itself and as eclectic as the souks which are at the heart of every Moroccan city.

For an insight into Morocco’s mish mash of cultures and a snapshot of the contrast between bohemian and Islamic, Tangier and Chefhaouen offer an intriguing twin-city break. Come for the shopping, culture and food but you might find yourself returning again for the barely-populated white sand beaches, and the warm welcome.