Cambodia’s tourism industry is still dominated by its cities, old and new, but tourists are now venturing into the Cardamom Mountains to discover its emerging eco-tourism scene, says Lynn Houghton

“…shhhhh. Quiet!” our tour guide hisses through his teeth. “Look ahead. In the trees!” Is it a bird or a snake? Or could it be a wild elephant? In this awe-inspiring wilderness, most of the inhabitants exist only here and nowhere else on earth.

Suddenly, leaves rustle just over the water. The foliage seems to move in tandem like a Mexican wave. Then we spot it: a silver langur launching from one branch to another in a brief but captivating acrobatic display.

From my canoe on the Phipot River in the southern Cardamom Mountains, I am desperately hoping to spy some of this area’s unique creatures. 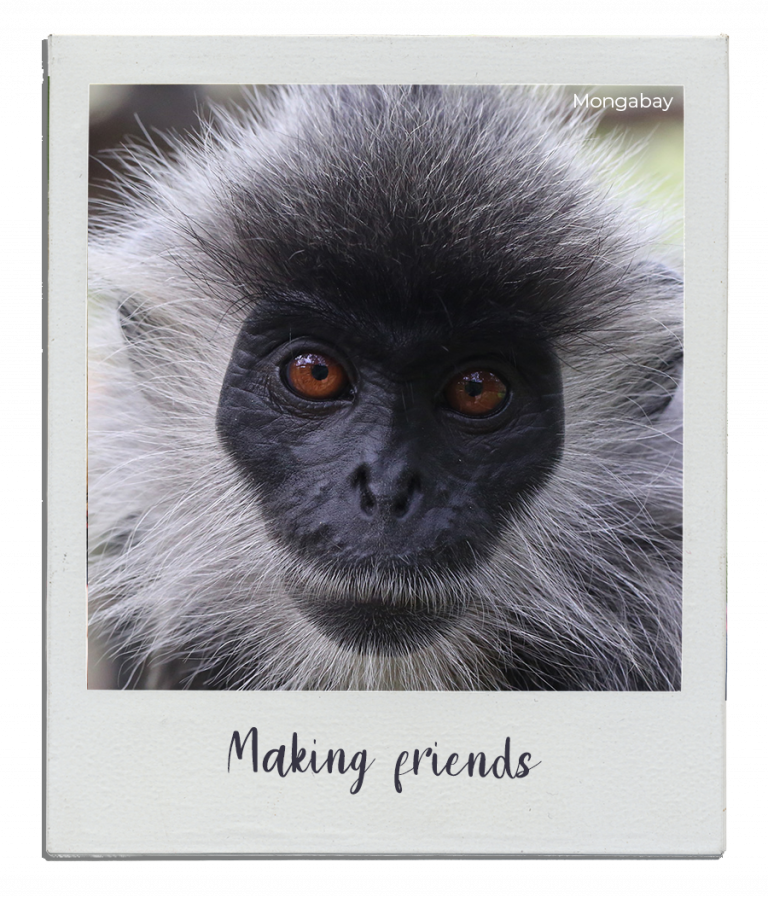 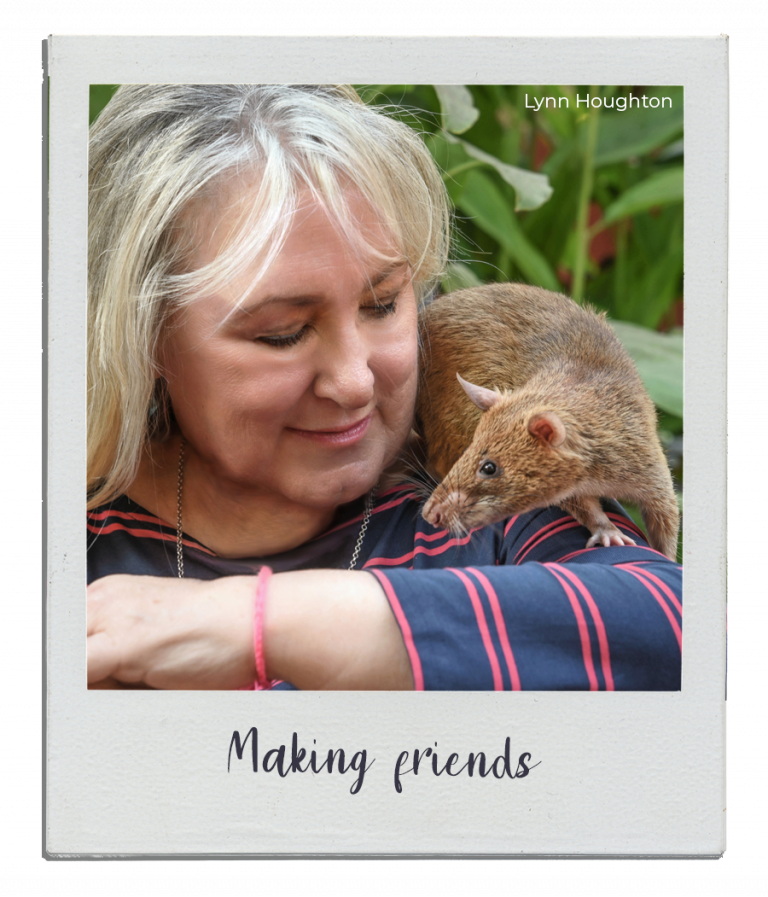 Long tailed macaques, Malayan sun bears, sunda Pangolins, and Siamese crocodiles are all endemic to these rivers and forests. But, tragically, due to habitat loss from illegal logging and the impact of poaching, most of these animals are now endangered. For this reason the land is under the watchful eye of the Wildlife Alliance, an NGO is hard at work fighting those who exploit this environment for their own gain. 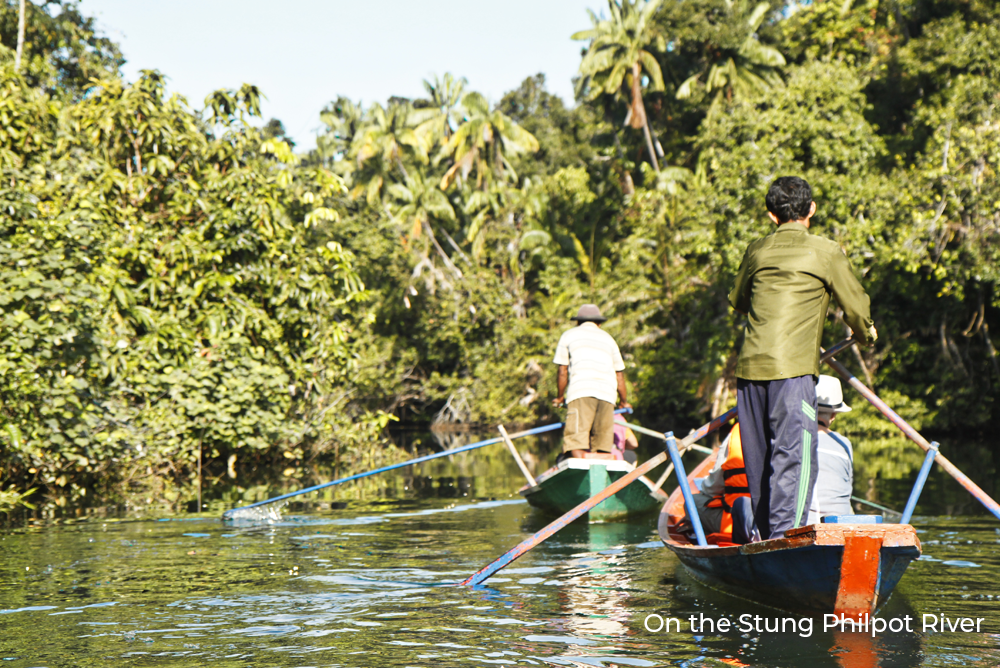 Earlier, I had got out of bed, dressed and stumbled into a pre-dawn mist where a small group of us made our way down the red-dirt road to the village pier. I’d prayed that our jungle hike later would be under canopy to shelter us from the already rising heat before clambering into the wooden boat and breathing in a mouth-watering aroma emanating from the helmsman’s bowl of steaming hot noodles. A short transfer to where the tributary meets the main river and we could board traditional canoes. Now navigating upstream, we are surrounded on both sides by thick, mystical jungle. It’s a primordial experience where time is suspended but all too quickly we arrive at the riverbank and clumsily disembark. This is the chance to devour our breakfast pancakes that come wrapped in banana leaves.
From here we begin our trek, walking single file on the narrow path. It’s as if the lush foliage is a sound barrier because everything is strangely hushed, even the birds. I focus on the incredible bio-diversity around me; mesmerised by the leaves glittering in the bright sun. It’s difficult to avoid tripping on protruding roots when my gaze is always pulled upwards to the canopy.
Back at Chi Phat, I retreat to my cosy bamboo bungalow at the Sunbear Lodge, escaping the heat for a well-deserved rest. Each hut is perched on stilts – necessary as during the wet season this area is completely flooded – and inside there is the essentiall mosquito net over a comfortable bed. During my stay I enjoy simple but delicious meals at the Chi Phat community centre which is run by four villages and overseen by CBET (Community Based Eco-tourism Committee). Tasks like cooking and cleaning are shared by everyone and it creates a homely and inviting environment.

Temples in the trees

After emerging from the jungle I am met by our tour guide and taken to our hotel in bustling Siem Reap where I join four others solo travellers for an early supper at an outdoor restaurant. A must-try dish from the excellent local menu is amok, a creamy fish curry made with coconut milk and egg, flavoured with a mild paste of turmeric, kaffir lime, lemongrass and shallots, all served in a delicate banana leaf bowl.

Like everyone in Siem Reap we’re here to see the famous collection of temples, moats and statuary that make up the Angkor complex – including Angkor Wat. The pre-sunrise wake-up call of 4.00am is tortuous but necessary to make the most of this vast area which has a 12km circumference. It also ensures we arrive in time for the morning ‘show’. Taking our seats on a set of stone steps opposite a large moat, we are not disappointed as the sky’s pastel pink hues become coral and then orange and the sun slowly rises behind the iconic outline of Angkor Wat. 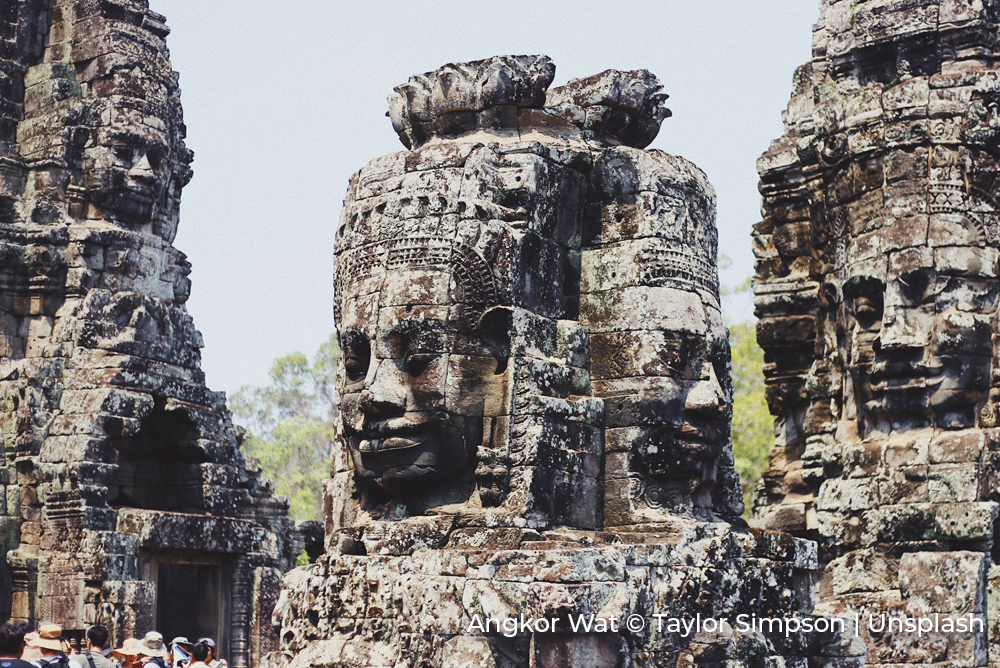 This 12th century building was a Hindu mausoleum for a king of the Khmer Empire and later converted to a Buddhist Temple and it forms just one part of the Angkor complex, the remains of the ancient capital which, it is now believed, was the largest pre-industrial city in the world.

Once we cross the bridge and enter the compound, evidence of soldiers’ activity is visible. The bewitching carved stone dancers have been used for target practice and bullet holes still pock their eyes and scatter their torsos. A mere 45 years ago the whole country was controlled by the infamous dictator Pol Pot and his Khmer Rouge regime. 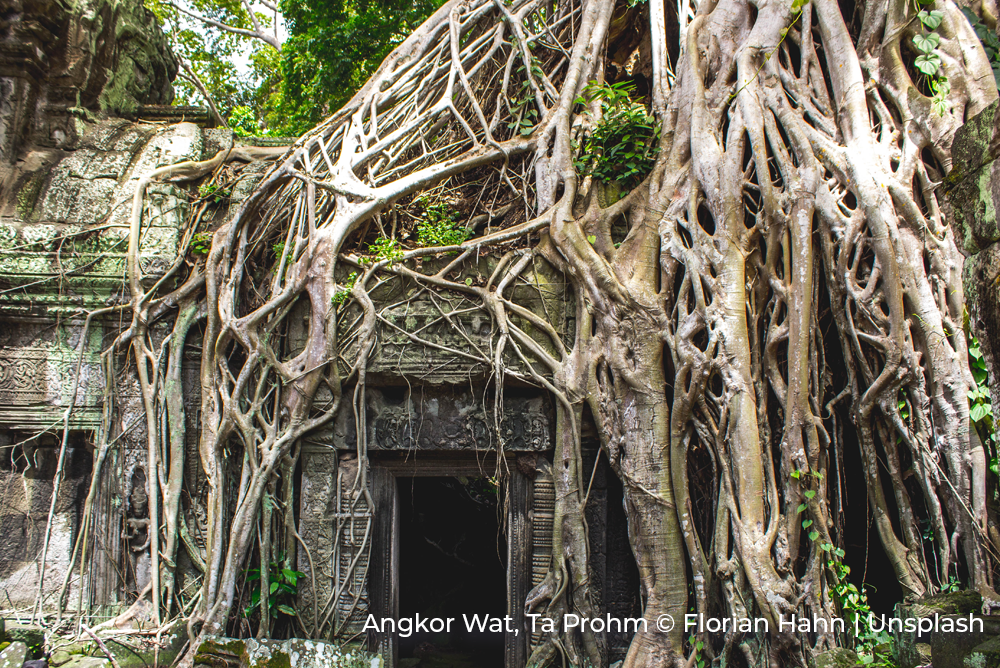 I find Ta Prohm the most enchanting complex of them all. Enormous roots extend from fig, banyan and kapok trees and entwine themselves among the stones and crumbling buildings. No wonder this is where the Tomb Raider film series was shot, it looks like a fantasy world. Nearby is the equally fascinating Bayon Temple famous for its enormous stone carved faces.
There is so much to see – the delicate rose hued statues and carvings of Banteay Srei, the silent rows of 54 gods and 54 demons that line the entrance to Angkor Thom – that I understand the necessity of a three-day pass. Alas, we have only one day and by evening find ourselves back where we have started, watching the sunset over Angkor Wat and sipping a cool beverage.

The next morning, we visit a special project dedicated to eradicating landmines, which once blighted the Angkor complex and still dot areas of the country. APOPO is an incredible charity which has a novel solution to these buried war relics, it trains Giant African Pouch Rats to sniff them out safely and quickly.

Across Cambodia there are still unexploded landmines, artillery rounds, grenades, mortars, and even aerial bombs in the rural north. These ugly remnants of three-decade long war have taken a severe toll on the people and Cambodia has the highest landmine accident rate per capita in the world. 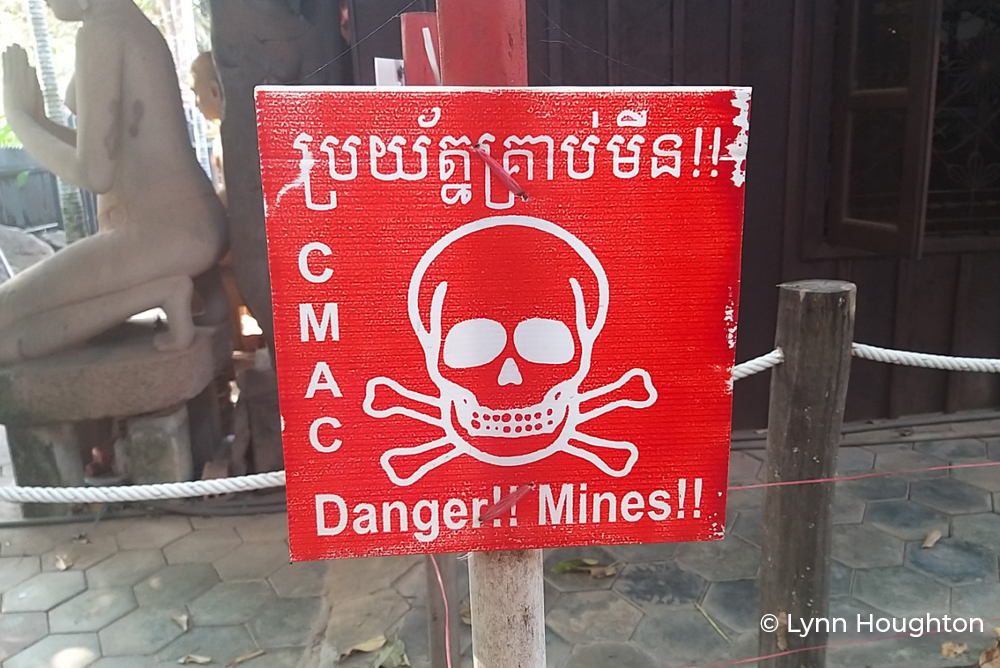 At the visitor’s centre in Siem Reap we are briefed by the manager, Mr. Meas Sambat. He emphasises that the animals and their handlers are well protected. A landmine is never triggered by the rats, as they are too light, and they are trained to scratch the ground if they detect one.

The rats are trained by learning to associate the smell of explosive TNT with a tasty treat as well as becoming used to being handled and on a lead. I can see that the animals are extremely attached to their trainers. They work for six years before they retire to a special section of the compound full of stimulating toys and activities.

“We have a remarkable success rate of nearly 93%, with hundreds of hectares of land having been cleared,” Sambat tells us. “Detonating, then removing the landmines and unexploded munitions, mean farmers can replant the rice fields and grow crops such as cashew nuts. It completely changes the lives of rural Cambodian people.”

At the end of my trip I arrive in Phnom Penh, the spectacular capital city of Cambodia. Striking for its ‘off the scale’ energy – evidence being the huge amount of traffic – this attractive metropolis lies on the confluence of the Mekong, Tonlé Sap and Bassac Rivers. These waterways impact everything about Phnom Penh. From human residents who take riverside strolls early in the morning and at sunset, to the birds (little grebes, pigeons and Asian glossy starlings) who gorge themselves on the swarming insects.

The vast numbers of motorcycles darting in and out of every street is like a colony of bees and means the city is always buzzing with phrenetic activity. Old sections of Phnom Penh are connected with chaotic bundles of electrical wire, bringing modern comforts to crumbling buildings. 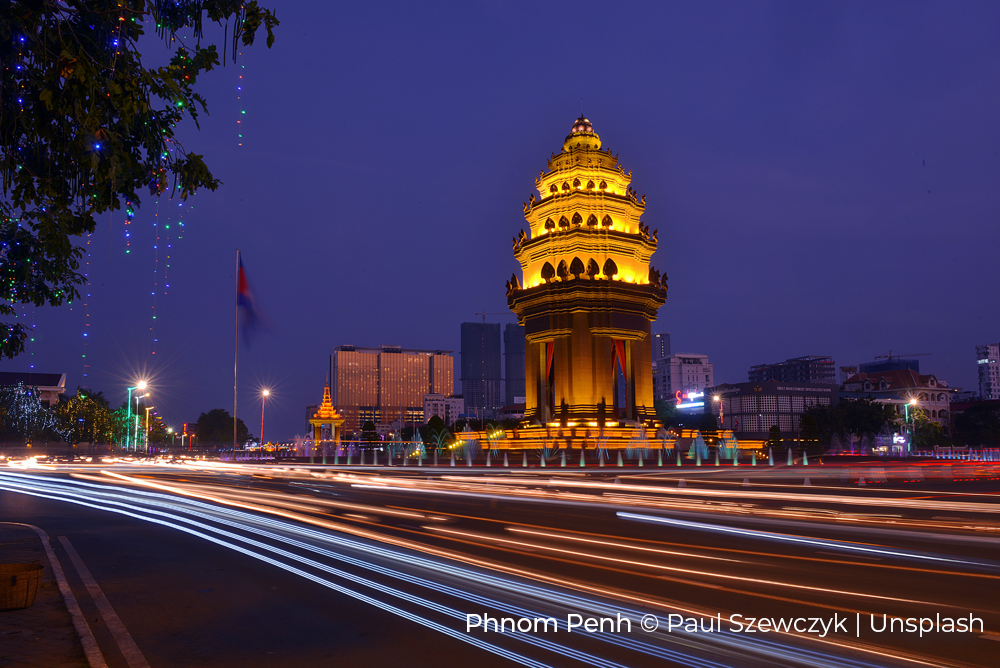 Every neighbourhood has a produce market but the city’s Russian Market is the best place to go for souvenirs. The crowded and sweltering bazar, so-called because it was popular with Russian expats in the 1980s, sells everything from hand-carved Buddhas to piles of different coloured kramas – the ubiquitous checked scarves used by locals for everything from a baby sling to a bandanna. 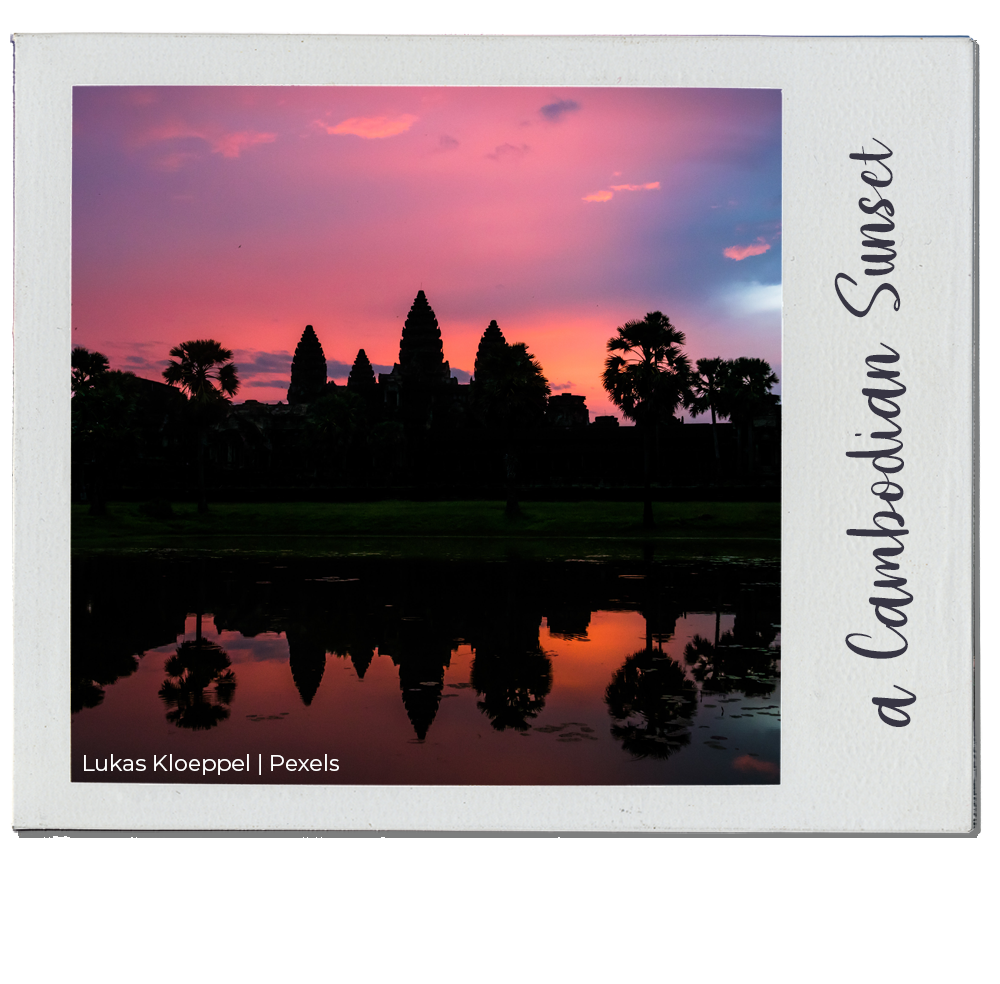 Our group converges to end the day in luxury at the famous Eclipse roof top bar, where we enjoy cool breezes and spectacular views over a sparkling Phnom Penh.

We head to the outskirts of Phnom Penh the next day, where evidence of the country’s dark past is preserved at the Choeung Ek Genocidal Centre. This is just one of the Khmer Rouge’s infamous ‘killing fields’ where the paranoid communist regime executed thousands of people it believed to be dissenters. It is a sobering experience with visceral memorials of genocide including a monument filled with the skulls of the victims.

It is estimated that between 1.5 and 3 million people died at the hands of the regime – even babies were not spared. Those targeted included the country’s educated, such as teachers and doctors, those with religious beliefs, ethnic minorities and even artists.

For a light end to such a grim day, the last evening is spent at a Cambodian classical dance performance. Slender women wear ornate traditional costumes with tall hats that appear to represent temples, and their stiff poses are accentuated by sinuous hand movements. We also enjoy storytelling and comedy. No doubt the Khmer Rouge would not have allowed any of it.

Cambodia’s past, whether it is the crumbling temples of Angkor Wat or the grim spectre of the Killing Fields, is fascinating. The future of this energetic country could lie in what has been there all along – the jungle. It smothered the temples and eventually spat out the last of the Khmer Rouge and hopefully it will soon usher in a new era of sustainable wealth for the Cambodian people. 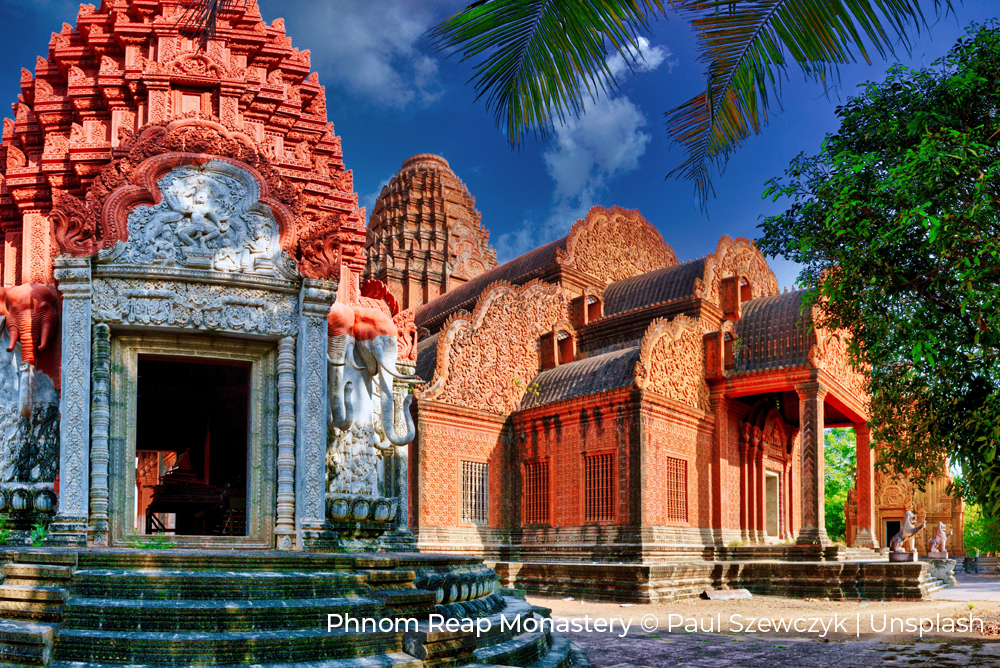